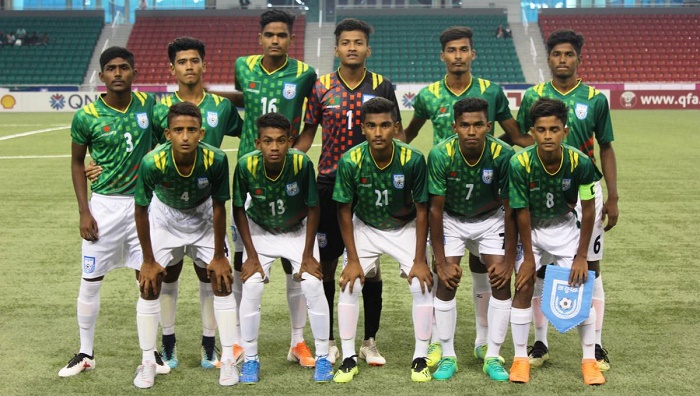 Bangladesh beat Bhutan by 3-0 goals in their second group match of the ongoing AFC U-16 Championship’2020 Qualifiers at Aspire Dome Indoor Stadium in Doha on Friday.

Bangladeshi boys started their domination from the opening minute of the game but they bagged its result as Siful Islam Saeed opened account for his side in the 45th minute (1-0).

In the 2nd half, Bangladesh doubled the margin while Bhutanese midfielder Kelzang Jigme buried the ball to his own net (2-0) in the 50th minute.

Bangladesh, which was put in Group E of the AFC junior meet along with Qatar, Yemen and Bhutan, will play Yemen in their remaining match on Sunday (Sept 22) at 7 pm (BdST) at the same venue.

Earlier, Bangladesh started their campaign conceding a 0-2 goal defeat against hosts Qatar in their first match Thursday night in Doha.

After the barren first half, forwards Rashid Abdulaziz Al-Abdulla and Abdulrahman Al-Dosari scored one goal each for the hosts in the 58th and 89th minutes respectively.