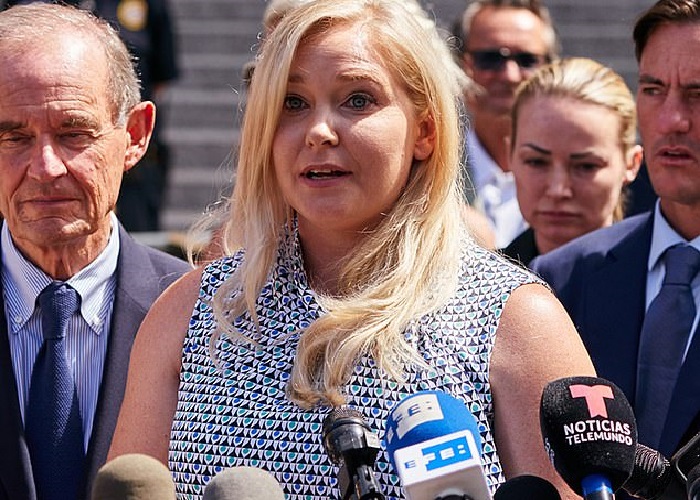 A woman who says she was kept as Jeffrey Epstein's sex slave of years is set to give her first ever TV interview in which she will claim that she was forced to have sex with Prince Andrew.

Virginia Roberts, who now goes by the name Guiffre, sat down with NBC's Dateline alongside five other Epstein accusers including Anouska de Georgiou, the first Briton to accuse Epstein of sexually abusing her while she was underage.

In the interview, Giuffre shares her account of being forced to have sex with Jeffrey Epstein and others in his powerful orbit, including claims against Prince Andrew.

Prince Andrew vehemently denies Giuffre's allegations, and has denied having any knowledge of Epstein's criminal behaviour during their friendship.

The interview will air on Friday at 10pm eastern time on NBC.

It comes a month after Roberts stood outside a federal courthouse in Manhattan and delivered a message to Prince Andrew, saying: 'He knows exactly what he's done. And I hope he comes clean about it.'

In the NBC interview, Roberts will also talk about her reaction to Epstein's death last month, and the impact it had on her after years fighting to bring him to trial

'It was such a shock to me. I mean when I say, "shock,"  didn’t have the words. I was in mourning, not because the world lost a monster,' said Roberts.

The interview will also address the sweetheart deal Epstein got from prosecutors, and the relaxed regulations he faced in prison.

Guthrie asks Palm Beach police chief Michael Reiter just how so many things worked out in Epstein's favor in this case.

These interviews, and more, will air in an all-new special investigative edition of Dateline NBC, Reckoning on Friday night.

Epstein traveled the world with Roberts in the years before his arrest, and even took the photos to prove it according to court papers.

Roberts, included these photos as proof of Epstein's depraved behavior in multiple lawsuits.

In one she is seen on a New York City ferry while others show her horse riding and posing up in front of a museum treasure chest.

Those three photos were taken by Epstein himself she claims, when he shuttled her to New Mexico for the weekend.

All the while raping her and letting his friends do the same, according to Roberts' lawsuit.

'Epstein took me on a ferry boat on one of the trips to New York City and there he took the picture above. I was approximately 15 or 16 years old at the time,' she writes of the first photo.

In that picture, Roberts looks years younger than her age as she smiles for the camera while on an unchaperoned trip with Epstein and Ghislaine Maxwell over 1,000 miles away from home.

'You can see how young I looked in the photograph,' she notes, while also revealing she was raped by Epstein at his Manhattan mansion on that trip.

'Over the next few weeks, Jeffrey Epstein and Ghislaine Maxwell trained me to do what they wanted, including sexual activities and the use of sexual toys,' she wrote.

'The training was in New York and Florida, at Epstein's mansions. It was basically every day and was like going to school. I also had to have sex with Epstein many times.'

Roberts said that she was trained to be 'everything a man wanted me to be.'

The photos that were used by Roberts make it clear that she was with Epstein at some of his properties, most notably his ranch in New Mexico.

'The first one is a museum in Santa Fe, New Mexico. We had gone sightseeing for the day. Epstein took this picture of me. I was approximately 17 at the time, judging from the looks of it,' write Roberts.

'At the end of the day we returned to Epstein's Zorro Ranch. The second picture is me on one of Epstein's horses on the ranch in New Mexico. The following two are from wintertime in New Mexico.'

Roberts and another underage victim are suing the government for the sweetheart plea deal they offered Epstein, and for failing to provide the plaintiffs and other victims with any concrete information about the sex offender.

In her case, Roberts did in fact get a letter from the FBI, but not until long after the plea deal had negotiated and Epstein's non-prosecution deal and signed.

That letter is attached as an exhibit in one filing, and shows it was mailed in September, more than two months after Epstein signed off on the deal in June .

Roberts, who was the first and remains one of the few Epstein victims who has gone public with her allegations, recounted how she found herself being shuttled around the world and raped by men three times her age in court papers.

'Epstein had promised me a lot, and I knew if I left I would be in big trouble. I also knew that I was a witness to a lot of illegal and very bad behavior by Epstein and his friends,' stated one filing.

'If I left Epstein, he knew all kinds of powerful people. He could have had me killed or abducted, and I always knew he was capable of that if I did not obey him. He let me know that he knew many people in high places. Speaking about himself, he said 'I can get away' with things. I was very scared, particularly since I was a teenager.'

And she was not the only one who was scared she claims in court documents.

'When I was with him, Epstein had sex with underage girls on a daily basis. His interest in this kind of sex was obvious to the people around him,' noted Roberts.

'The activities were so obvious and bold that anyone spending any significant time at one of Epstein's residences would have clearly been aware of what was going on.'