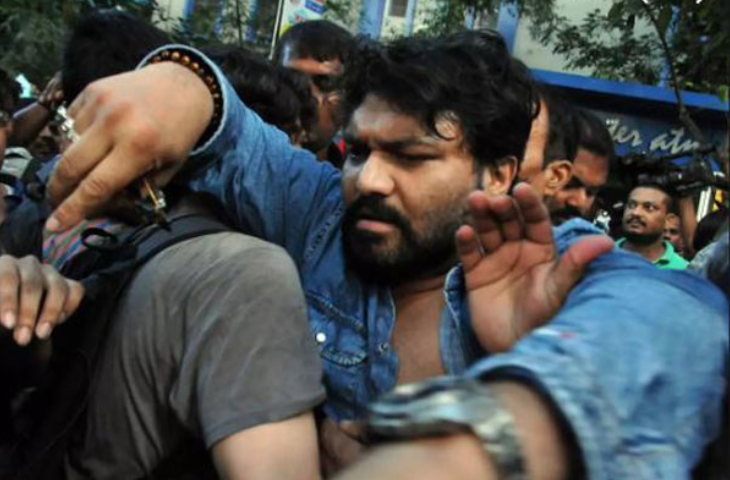 Indian Union Minister Babul Supriyo was pushed, assaulted and his shirt was torn when he went to Jadavpur University in Kolkata of West Bengal(India) on Thursday for an event organized by the Akhil Bharatiya Vidyarthi Parishad, the students' organisation linked to the BJP.

"They pulled me by my hair and pushed me," said the minister, who is seen in videos surrounded by a huge crowd of protesting students refusing to let him enter the campus.

The minister was brought out of the campus by West Bengal Governor Jagdeep Dhankhar, who drove to the spot.

Visuals show Mr Supriyo being attacked, pushed around and his shirt open as he struggles against an aggressive crowd. He is practically carried by the mob.

The Union Minister tweeted this morning condemning the Mamata Banerjee government for not taking action.

"You have no words to utter for six hours or no administrative action from Mamta Governnet.. Your dirty politics have overpowered your logic. I pity you. FYI, if the Vice Chancellor wanted, the situation would have been under control at 3 pm before your #SFI (Students Federation of India, linked to the Left) hooligans started it. AVBP had Jadavpur University registrar's permission to do the event," Mr Supriyo tweeted.

As the Governor's office called the incident "very serious reflection on the law and order of the state and on the conduct of the law enforcing agencies", the ruling Trinamool Congress said the Governor had gone on a "so-called rescue" mission without taking the "government into confidence" or giving the state authorities a chance to handle the situation.

"I did not come here to do politics. But I am saddened by the behaviour of some of the students of the university, the way they have heckled me. They pulled me by my hair and pushed me," Mr Supriyo said last night.

He also said the protesting students tried to provoke him by "openly calling themselves Naxals". The students also blocked his way to the car, refusing to let him leave.

"The Governor takes the incident very seriously as it involves unlawful detention of a Union minister and this is a very serious reflection on the law and order of the state and on the conduct of the law enforcing agencies," the Governor's office said in a statement.

The Trinamool Congress accused him of making political statements.

"Neither Trinamool nor the police are involved in the incident," the state's education minister and senior Trinamool leader Partha Chatterjee said.

Chatterjee said Mr Supriyo had gone there without informing the government and the governor didn't give a chance to the state administration to tackle the situation.

"Hon'ble Governor went there without taking the State Government into confidence. On his way, he rang up Chief Minister Mamata Banerjee. The CM requested him to give the government some time to peacefully solve the issue. But instead of taking the government into confidence, the Governor went there to help BJP. Before going there, he released two press statements that I quote 'this is a very serious reflection on the law and order in the State'," the minister said.