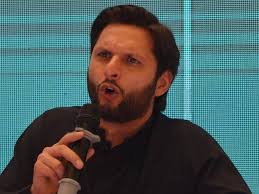 Sri Lanka's cricket board on Thursday confirmed that the team will be touring Pakistan despite fears that players could be the targets of terror attacks during the six-match visit. The tour was put in jeopardy after Sri Lanka Cricket (SLC) revealed last week that they received a warning from their Prime Minister's Office. Some Sri Lankan players including T20I captain Lasith Malinga, Angelo Mathews and Dimuth Karunaratne opted out of the Pakistan tour. While Pakistan legend Javed Miandad lashed out at the Sri Lankan players asking the SLC to penalise those who had refused to travel, former Pakistan captain Shahid Afridi came up with a ludicrous claim that the Indian Premier League (IPL) was the reason behind some Sri Lankan players' decision to boycott.

In a video interview, Shahid Afridi claimed that the IPL threatened not to give Sri Lankan players a contract if they toured Pakistan.

"Sri Lankan players are under pressure from IPL franchises. I spoke to Sri Lankan players last time when there was talk of them coming to Pakistan and playing in PSL. They said they wanted to come, but IPL guys say if you go to Pakistan we won't give you a contract," said the all-rounder.

"Pakistan's always supported Sri Lanka, it never happened that we had a tour of Sri Lanka and our players rested. SL's board should put pressure on their contracted players to go to Pakistan. Sri Lankan players who'll come will always be remembered in Pakistan's history"

On Thursday, Sri Lanka Cricket Secretary Mohan de Silva said they received the all-clear from the defence ministry to leave for Pakistan on Tuesday.

"We have the green light from the defence ministry," de Silva told AFP. "The tour is on as we planned. I myself and our office bearers will also be accompanying the team."

Reports last week of a possible terror attack were referred to the defence ministry for investigation.

The Sri Lanka team was the target of an attack during a Test match in Pakistan's Lahore in March 2009, with six players injured when gunmen attacked their bus.

Since the attack, a majority of international teams have refused to tour the South Asian country.

Sri Lanka's first match in Lahore after that was one T20 game against Pakistan in October 2017.