Why Pakistan Poking Its Nose in Kashmir? 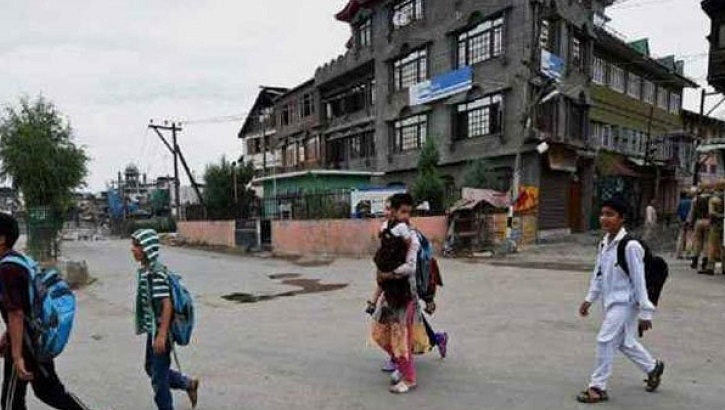 The recent reactions and the later activities of Pakistan after abolition of the article 370 from the Indian constitution which provided special status to Indian administered Kashmir seems to be the interference in internal affairs to another independent sovereign country and threatening the peace and tranquillity of this sub-continent. If we analyse the cause about the problem of Kashmir, we will find that Pakistan had a major role to create the problem at the time of partition of India subcontinent into India and Pakistan in 1947. If anybody says how then let me go back to the history of Kashmir and analysis the genesis of its problem.

The history of Kashmir is intertwined with the history of the India subcontinent. Kashmir has had the experiences of being ruled by different rulers of different ideologies like Hinduism, Buddhism, Shaivism, Muslim monarchs of different dynasties like Shah Mir dynasty, Mughal dynasty, Afgan Durrani dynasty, the Sikhs and the Hindu rulers since the first half of the 1st millennium until the partition of India subcontinent in 1947.

At the time of partition of the subcontinent Mr. Hari Singh was the monarch of the Dogra dynasty who had ascended the throne of Kashmir in 1925. He was a Hindu ruler of the Muslim majority state. At the end of the British rule in India, Mr. Hari Singh was given the option to join either with India or Pakistan or to stay as an independent state. In the meantime, an internal revolt began in the Poonch against the oppressive taxation by the Maharaja. In August 1947, Maharaja's forces fired upon a demonstration in favour of Kashmir joining Pakistan, burned whole villages and massacred innocent people. The Poonch rebels declared an independent government of "Azad" Kashmir on 24 October 1947.

While the British abandoned their suzerainty over the princely states at the time of the partition in 1947 left the option to the rulers of princely states for joining India or Pakistan considering the factors such as geographical contiguity and the wishes of their people or remaining independent.

Actually, the intention of Maharaja Hari Singh was to remain as an independent state and it was supported by the major political groups of Jammu and Kashmir except for the Muslim Conference which declared in favour of accession to Pakistan on July 1947. The Muslim Conference was popular in the Jammu province of the state. It was closely allied with the All –India Muslim League which was struggling for the creation of Pakistan.

In such a situation, the Maharaja Hari Singh signed a standstill agreement with Pakistan for the continuity trade, travel, communication, and similar services between them in order to buy time to make the decision on the option offered by the British government.

Following the huge riots and counter riots both in Jammu and West Punjab, in October 1947, there was a large number of infiltrations and insurgents in Jammu & Kashmir from Pakistan with the support of Pakistani troops joined with Poonch rebels and started looting, torching houses, damaging the properties and killing the innocent people. Maharaja Hari Singh being frightened with such a situation appealed to the Government of India for help, and the Governor-General Lord Mountbatten agreed on the condition that the ruler is willing accedes to India. As soon as the Maharaja signed the accession instrument, Indian Forces entered Kashmir and drove the Pakistan sponsored insurgents and irregulars from all but a small section of the state. India accepted the accession provisionally until the will of the people is ascertained.

Kashmir’s popular leader Sheikh Abdullah endorsed the accession as an ad hoc arrangement which would be ultimately decided by the people of the state. Sheikh Abdullah was appointed as the head of the emergency administration by the Maharaja. The Pakistan government instantly opposed the accession and termed it as fraudulent. Maharaja did it under duress which he had no right to do it while the standstill agreement with Pakistan was still in force.

In early 1948, India took up the Kashmir conflict to the UN for seeking resolution. The UN mission insisted that the opinion of the people of Jammu & Kashmir must be ascertained to decide the accession of Kashmir. But the plebiscite in Kashmir to decide the fate of the Kashmir could not be conducted due to the interpretation of the procedure for and extent of demilitarisation. India wanted the complete withdrawal of forces of both the countries from Jammu and Kashmir before the plebiscite, while Pakistan wanted plebiscite keeping their forces in Azad Kashmir. This has deteriorated the relation between India and Pakistan and eventually led to two more wars in 1965 and 1999 over the Kashmir. Pakistan is not at all willing to withdraw their army from the part of Kashmir they manage to keep occupied at the end of the 1947 war in Kashmir.

Although they are required by the Security Council resolution 47 to remove all armed people from the Azad Kashmir before holding the plebiscite. Pakistan divided their part of Kashmir into Azad Kashmir and Gilgit and Baltistan.

India has also boundary dispute with China over the northern border of Kashmir. Between the late 19th and the early 20th centuries, there was some boundary agreement signed between Great Britain, Afghanistan, and Russia but China did not accept these agreements. By mid-1950 the Chinese army had entered the north-eastern part of Ladakh and constructed the military road by 1956 -1957 through Aksai Chin area between Xinjiang and western Tibet. This had started border conflict between China and India and culminated in the Sino-India war in 1962. During the war, China occupied Aksai Chin and, in addition, an adjoining region, the Trans Karakoram Tract was ceded by Pakistan to China in 1965.

Actually, the bitter enmity between India and Pakistan started developing since the Maharaja Hari Singh handed over the Jammu & Kashmir to India and the Government of Sheikh Abdullah was installed there, who was a popular leader of Jammu & Kashmir and leader of the National Conference Party.

The growing dispute over Kashmir and the consistent failure of democracy in Kashmir have led to rising the Kashmir nationalism and militancy in the state. This was intensified by the infiltration of Mujahedeens from Afghanistan after the end of the Soviet-Afghanistan war in 1989 accompanied by Pakistani insurgents. Pakistan was reported to provide arms and training to both indigenous and foreign militants in Kashmir.

On August 5, 2019, the Jammu and Kashmir State was converted to Union Territory along with the separation of Ladakh into a separate Union Territory and the abolition of Article 370 of the Indian Constitution through a presidential decree and subsequently passed by the Indian Parliament.

With the removal of Article 370 by the Indian Parliament, Pakistan started hue and cry both in and outside of the country to create a storm in the international arena against the repeal of Article 370 of the Indian constitution. They took up the issue to the UN Security Council with the help of China, but could not get support in favour of their move except China as they regarded it is an internal affair of a sovereign country. So they left this issue to be solved by themselves.

I don’t understand why Pakistan is poking its nose into the affairs of Indian administered Kashmir, whether it is for securing the rights and interests of Muslims of Jammu & Kashmir or any other purposes behind their move. If we look at the geographical location of Kashmir, we will find that it is located at the base of the Himalayas, the sources of waters of five major rivers of Pakistan coming through Kashmir. If Pakistan can bring the Kashmir under their control, then the abundant quantities of water supply from the Himalaya to their rivers would be ensured. The water is the life of agricultural production and electricity generation in their country.

If they have a love for the Muslim then why did they kill thirty lakh people and dishonoured two lakh women, burning the lots of houses, looting and damaging the properties in Bangladesh in 1971 where 90 per cent of people were Muslim? Why they do not allow the people of Sind, Baluchistan, NWFP, and Kashmir to decide their own fate? Why are they doing atrocities to the people of those areas struggling for self-rule? Why are they reluctant to withdraw their forces from Azad Kashmir in compliance with UN resolution to conduct the plebiscite under UN supervision throughout the whole area of Kashmir both under the occupation of Pakistan and India? Without resolving their own problems, they are interfering with the affairs of another sovereign country.

The infiltration of insurgents from Pakistan to India has not as yet stopped. The different militant groups in Kashmir are aided with arms, ammunition and training by Pakistan. Unless Pakistan refrains from this kind of activity, the prevailing war-like tension between Pakistan and India would not come down.

After analyzing the above circumstances I have formed an impression that Pakistan prefers to control the supply sources of water from the Himalaya through Kashmir to the rivers of Pakistan and not for the interests of the Muslim population in India occupied Kashmir. It is only possible if Pakistan can capture Kashmir anyhow. But that would never happen. The problem of Kashmir would not happen if Pakistan could refrain from sending forces to occupy Kashmir in 1947.

If Pakistan would have supported the independent loving people led by Sheikh Abdullah and Maharaja Hari Singh, who was in favour of remaining as an independent state, instead of sending their forces to Jammu and Kashmir to frighten Maharaja Hari Singh into submission, the present crisis would not have arisen. If those would not happen, the world community could then find three independent countries in India subcontinent. And thus political tension in this subcontinent as we find now would not be there and the peace and balance of powers among the countries would remain intact.

The writer, a former joint secretary of the government.