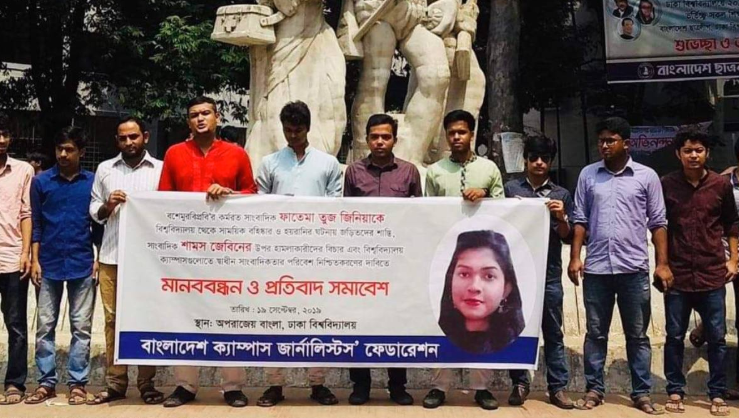 The demand came from a human-chain programme arranged under the banner of ‘Bangladesh Campus Journalists Federation’ at the foot of Aparajeyo Bangla on Dhaka University campus.

ARM Asifur Rahman, president of the platform, alleged that BSMRSTU VC Prof Khandakar Nasir Uddin runs the university in an autocratic manner. “No-one can talk against the irregularities of the VC as there’s no freedom of speech on the campus.”

“Campus reporters of the university can never write freely for this VC and he suspended one of our colleges just for her Facebook status, which is unthinkable,” he added.

Mahmudul Hasan Nayon, general secretary of the platform said, BMSRTU authorities have already revoked the suspension order of Zinia but this not enough. “We won’t go back until the VC resigns.”

Amid huge protests and criticisms against the decision, the university authorities on Wednesday revoked the suspension order.

They came up with the demand under the banner of “Jagannath University Journalists' Association (JnUJA) which formed the human chain in front of Shaheed Minar of the university around 12 pm.

JnU journalists' association president Humayun Kabir said the vice-chancellor, in the name of disciplinary action, tries to keep the students’ mouths shut and stop doing constructive criticisms. “All the students have the rights to speak but the VC doesn’t allow it.”