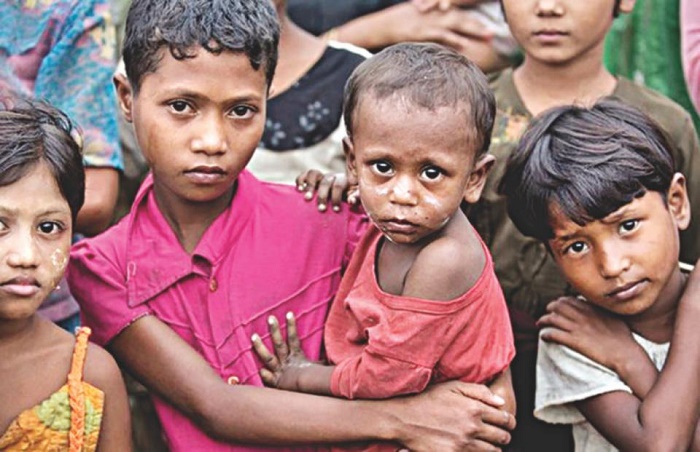 For a five-year old Nafisa, who was suffering from fever for few days, and lived through a pain-afflicted experience, it had been a hard time. Living under the care of her parents at an Ukhiya Rohingya camp in Cox’s Bazar, fever was not her only bad companion as she was suffering from chicken pox also. As she was found crying all day long, her poor parents were making futile efforts to console her. Rather pangs of diseases has aggravated Nafisa’s fear and ordeal that appear widespread all over the camps.

A noticeable escalation in the outbreak of chicken pox, fever and other diseases has set in the Rohingya refugee camps as seven-year-old Rashed Ali was also suffering from the same disease. Seeing the agonies of her son, Ali’s mother rushed to a health worker and brought medicine for the recovery of her minor boy. After a 10-day care and medication, Ali recovered from the chicken pox.

“It was a nightmarish experience for me to undergo as sufferings due to chickenpox made my son Ali crying all day long. It also barred Ali to go around and mix with other children,” Ali’s mother, Rahela Begum said, adding “Seeing the agonies of her son left her to bear worries and anxiety.”

No one needs any further reminding that children in the camps are vulnerable to chicken pox and other infectious diseases. Although in most cases childhood disease is not a not a life-threatening condition, it can cause major financial and social burden to parents looking after their sick children.

Reviewing the situation, Dr Anowarul Azim said at one point there were many people with the highly contagious virus that causes an itchy rash and small fluid-filled blisters. “Because they are all in such close quarters, once one person gets it, they all get it,” he added.

He said many of the illnesses he’s seen– like upper respiratory infections, scabies and stomach illnesses– are typically minor sicknesses, but they can be serious for pregnant women and people with compromised immune systems.

As of the month of January of this year, a total of 832 Rohingya refugees living in Cox’s Bazar camps, have been confirmed with chicken pox. Out of which, 51 per cent were reported from Ukhia and 49 per cent from Teknaf, with 39 per cent under the age of 5, according to a joint statement from health ministry and World Health Organization (WHO).

Many children of Rohingya camps in Ukhiya and Teknaf are suffering from chicken pox. Responding to an outbreak of chicken pox in the Rohingya refugee camps, health sector partners led by the Ministry of Health and World Health Organization (WHO) have stepped up surveillance and initiated measures to curtail further spread of the disease and prevent any complications.

The health workers under the banners of different non-government organizations (NGOs) are being trained for identifying chicken pox cases early, and efforts are on to promote preventive measures, Rashida Khanam, a health worker of BRAC, said.

Commenting on this, Dr Anowar Parvej said chicken pox, also known as Varicella, is an acute, highly contagious disease caused by varicella zoster virus, usually during childhood. It’s a self- limiting disease, but severe complications may arise such as secondary bacterial infections in children, and pneumonia in adults, he added.

Led by the civil surgeon, a team from Ministry of Health (MoH), World Health Organization and other health sector partners are taking all possible measures to curb the outbreak.