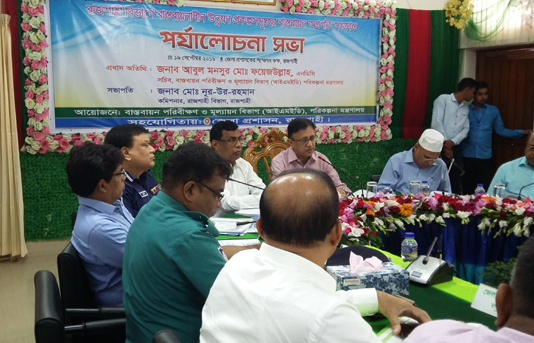 Some 55 development projects involving around Taka 18,170.97 crore are now on the implementation stage under the Annual Development Programme in all eight districts under Rajshahi division.

Works of Taka 723.04 crore were implemented by the respective implementing agencies in the division till August last.

This was revealed in a divisional level meeting organized by Implementation Monitoring and Evaluation Division (IMED) under the Ministry of Planning related to reviewing of all the projects at conference hall of Deputy Commissioner in Khulna on Thursday.

Director of all the projects presented their respective progress reports through attending the meeting.

IMED Secretary Abul Mansur Mohammad Foyez Ullah addressed the meeting as chief guest while Commissioner of Rajshahi division Nur-Ur-Rahman was in the chair.

In his remarks, IMED Secretary Abul Mansur urged the project directors to be careful in spending people’s money and underscored the need for implementing projects within the stipulated time for the welfare the public in general.

He also directed them not to waste public fund, saying, “You must be very careful about public money, especially in case of development projects.”

He said a large amount of the national budget was earmarked every year to implement the ADP to ensure better lives of the citizens of the country.

Transparency and accountability during the projects implementation period must be ensured so that the people can derive total benefits of the projects, he added.