Priyanka phenomenally talented: Rajkummmar Rao on working with her 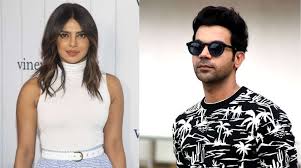 Rajkummar Rao, who will join Priyanka Chopra Jonas in Netflix's film adaptation of "The White Tiger", says the actor is phenomenally talented and he is looking forward to work with her, reports PTI.

The film will be directed by Iranian-American filmmaker Ramin Bahrani, who will also write the screenplay. Bahrani is best known for films like "Chop Shop", "99 Homes" and "Fahrenheit 451".

"I am very excited for this. It is a great book. I have read it. I met Ramin (Bahrani) and he is a great guy. I am really looking forward to start working on it pretty soon.

"Priyanka is phenomenally talented so I think we will have a good time together," Rajkummar told reporters at the trailer launch of his film "Made in China".

Aarvind Adiga's Man Booker Prize-winning novel follows the extraordinary journey of a self-made man from tea-shop worker in a village to successful entrepreneur in a big city.