Bavuma takes the blame for SA's finishing woes in Mohali 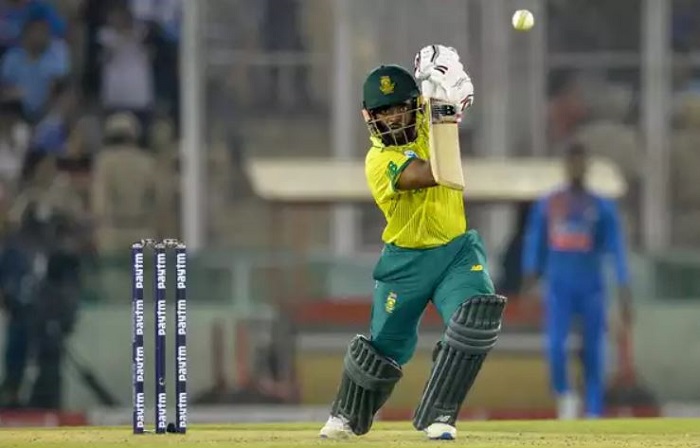 Temba Bavuma took the blame for South Africa's dismal batting at the backend of their innings after the visitors' crushing seven-wicket defeat at the hands of India in the second of the three T20Is, in Mohali on Wednesday.

Despite an early wicket, South Africa got off to a flying start as Quinton de Kock led from the front with a 37-ball 52 on his captaincy debut, adding 57 runs for the second-wicket partnership with Bavuma who contributed 49 off 43 to the team's cause in his maiden T20I. However, from a comfortable 78/1 at the halfway stage, the tourists eventually could only get to 149 from their 20 overs, thanks to a disciplined comeback by the Indian bowlers.

Despite being pigeonholed as a red-ball specialist, Bavuma was off to a brisk start as he pulled Hardik Padya over deep square leg in the eighth over and then fetched back-to-back boundaries in the all-rounder's following over of the opening spell.

However, with de Kock falling at the other end, followed soon after by the dismissal of Rassie van der Dussen for just 1, a well-set Bavuma failed to push the accelerator despite having David Miller with him in the middle. Batting at 42 off 31 at one point, the South African No. 3 took his foot off the pedal and consumed another dozen deliveries for just seven runs more to his total in the death overs as South Africa's innings lost steam towards the end. The visitors were consequently restricted to a score well below par for the Mohali surface.

Bavuma felt his side was rather comfortably placed until Miller's arrival in the 13th over, but a collective comeback from India's bowling attack meant South Africa had to work hard for their runs in the death overs. Only two of their seven overs from there on yielded more than 8 an over, the last of which came after the duo had departed in the space of seven deliveries.

"When David came in at No. 5, I think in the 13th over we were in a very strong position. That's where we probably fumbled a bit in our batting cause. At the halfway stage I was thinking 180 at least - that could be a very competitive score. But yeah we just weren't able to get going. I'm the one to be blamed. I wasn't really able to get the momentum. And all the other big hitters, I thought the platform was really set for the boys to go and do their thing," Bavuma told reporters on Wednesday.

"They're always going to have a good bowling phase. It's very hard to play a perfect 20 overs of cricket. As much as they had those good 2-3 overs, myself and Quinton were able to build a partnership and get us into a good position. From the 12th over to about the 16th [18th] is when we, I'd like to think, lost the game in our batting. If we were able to keep up the intensity there, I don't think we would have ended up with a score of 150," the 29-year-old added.

Bavuma gave due credit to India's bowlers for their roaring comeback to set up their 1-0 series lead, but felt the hosts aren't unbeatable either in the shortest format if this young South African side can learn to seize the crucial moments in the game.

"They're a formidable team but I don't think they're not an unbeatable side. Like I said, with our batting it was just one phase where we let ourselves down. And a quality side like that would make us pay. So I think there's always a moment in the game where we can win, and I think for us its more about being aware of those moments and making sure we're in the right mental space to win those moments," he said.

"It's something that we can work on. I don't think we were completely outplayed in the game. There are a lot of positives that we can take forward from this game."

The last game of the three-match series will be played in Bengaluru in Sunday (September 22).