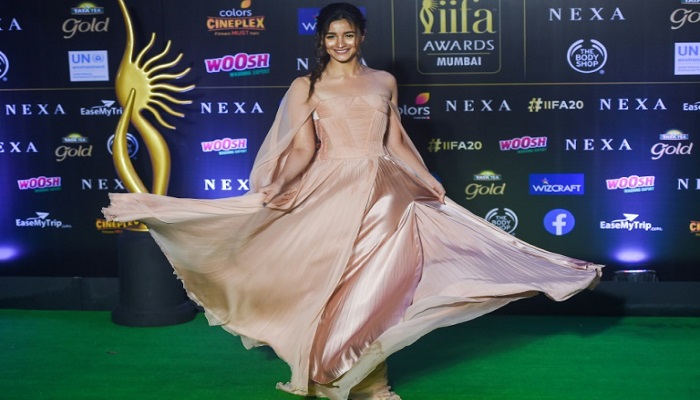 Spy thriller "Raazi" stole the night at Bollywood's answer to the Oscars, taking best film and best actress for its young star Alia Bhatt in Mumbai where the glitzy awards gala was held for the first time since being established two decades ago.

Megastar Ranveer Singh won best actor for his role in the controversial "Padmaavat", a historical action movie that enraged Hindu radicals but was an international success.

The International Indian Film Academy (IIFA) awards went on into the early hours of Thursday and Indian-British star Bhatt said it had been worth the wait as she received her prize.

"The fact that you are all sitting here past 2:00am and watching us being honoured means you all love cinema and that's why we continue to do what we are doing," she said.

"It feels surreal to hold this IIFA award for 'Raazi' and to be nominated alongside talented actors... who were my inspiration to become an actor."

"Raazi", directed by Meghna Gulzar -- one of the rare female executives in Bollywood -- revolves around a Kashmiri spy who marries a Pakistani official so she can send back intelligence before the 1971 India-Pakistan war.

The topic has been delicate since New Delhi's decision in early August to revoke the autonomy of Indian-administered Kashmir, ramping up tensions between the nuclear-armed neighbours.

"Andhadhun", a black comedy about a nearly blind piano player who witnesses a murder, won best director for Sriram Raghavan as well as best screenplay and best story.

Aditi Rao Hydari won best supporting actress for her role in "Padmaavat", which caused a storm as soon as filming started. But no mention of the controversies were made at the gala.

"It's a miracle and a blessing I made it as an actor. To do what I love to do for a living is a gift," Singh said, praising his wife and co-star Deepika Padukone.

Hindu hardliners, who complained that the story misrepresented its central figure Queen Padmavati, attacked the film set and staged protests that forced a delay to the film's release. It only came out after changes ordered by India's film censors.

It is the first time in 20 years that the awards have been held in India -- previous events have taken place in key foreign markets for Bollywood including the United States, Britain, Singapore and the Middle East.

But with the Indian film industry booming, this year the awards returned home to Mumbai.

Many of Bollywood's top stars such as Salman Khan, Katrina Kaif and Deepika Padukone turned out in extravagant outfits.

With nearly 1,800 titles released in 2018, India is the biggest film industry in the world in terms of movies made.

Revenues grew 12.2 percent in 2018, which included not only Bollywood movies but also regional titles, according to a March report by Ernst & Young.

The IIFA ceremony sets off India's award season that culminates with the National Film Awards, which has a smaller global audience but is considered more prestigious.