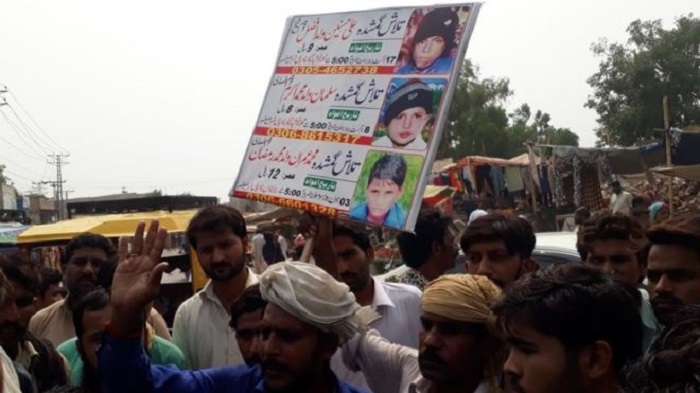 Angry crowds have protested in the Pakistani district of Kasur after the bodies of three boys were found.

Police have confirmed one was raped before he died. Post-mortem reports on the other two boys are awaited.

Kasur in Punjab province has seen a string of child abductions, rapes and murders in recent years.

In 2018 the killing of a six-year-old girl prompted widespread outrage, and protests complaining of police incompetence in which two people died.

The man executed for raping and murdering the girl, whose name was Zainab, was convicted of similar crimes against six more girls.

On Wednesday crowds in the Chunnian area blocked roads and burned tyres after the boys' deaths were confirmed. The local police station was surrounded and pelted with stones.

The bodies of the three boys, all reported to have been under the age of 10, were recovered a day earlier.

The remains of two other boys - thought to have disappeared in August - have not been identified. The cause of their deaths has yet to be announced.

"Police have obtained samples for their DNA tests," Mr Ghani said. A search is still going on for a fourth boy who has been missing since June.

Police have detained a number of suspects in connection with the discovery of the bodies, which were buried in sand in an industrial area. Locals say scraps of fabric found with the three bodies matched clothing worn by two of the boys.

Mohammad Afzal, a labourer whose son Ali Husnain disappeared in August, told the BBC he had searched for his son ever since. "It's been a month since our house couldn't cook."

Suleman Akram has also been missing since August.

"He left home in the evening to play as usual but he did not return at night," his uncle Muhammad Ashraf said. "Sadly, the police did not co-operate with us in the search for the children."

The area has been gripped by fear for weeks, BBC Urdu reports, with parents stopping their children from going out and playing.

Muhammad Imran went missing during the school holiday in June.

"When it was time for lunch, he did not come and I sent the children to bring him but they could not find him," his mother said.

The conviction of Zainab's killer was notable in a country where child abuse often attracts little attention.

It brought promises of tough action in terms of police training and legislation.

But her killer was brought to justice only after her family, not the police, obtained CCTV footage of her last movements.

The footage, which showed a girl being led away by a man, was circulated widely on social media. The hashtag #JusticeForZainab later went viral, with many Pakistanis calling for action.

After a DNA match, 24-year-old Imran Ali was arrested, tried and convicted. He was executed last October.