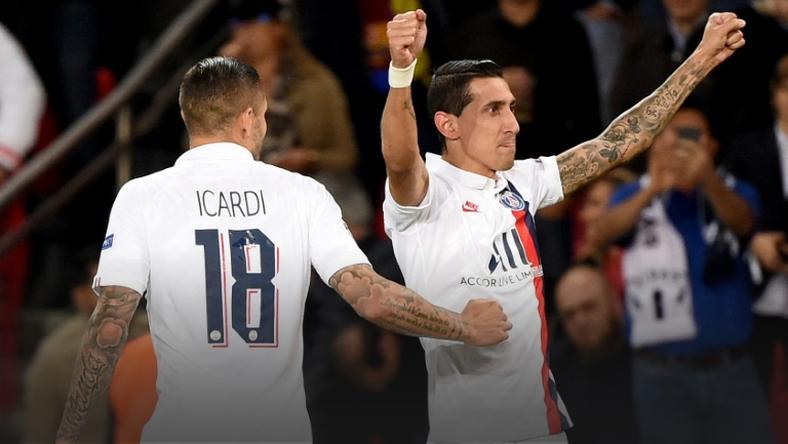 Angel Di Maria was hailed as "exceptional" after scoring twice against his former club as Paris Saint-Germain shrugged off the absences of Neymar and Kylian Mbappe and thrashed Real Madrid 3-0 on Wednesday to get off to the perfect start in the Champions League.

Di Maria beat Real goalkeeper Thibaut Courtois at his near post to put PSG ahead in the 14th minute at the Parc des Princes, but it was his second goal just after the half-hour that really lit up this encounter.

The Argentine, who starred for Real for four years and won the Champions League with them in 2014 before moving to Manchester United, gave Courtois no chance with a left-footed shot from 20 yards out that arrowed into the corner.

Thomas Meunier added the gloss at the death but it was Di Maria who had cleared the way, stepping into the gap left by the injured Mbappe and Edinson Cavani as well as suspended Neymar.

"We can't be too surprised because he has been showing for more than a year now that he is capable of performances like that," said PSG coach Thomas Tuchel. "He was exceptional tonight. He is always dangerous."

After a summer dominated by the saga of whether Neymar would leave, it was a reminder that the French champions have others capable of winning such games.

These two clubs are trying to recover some of their lustre after disappointing campaigns in Europe last season, but for PSG this result is a measure of revenge for their defeat at the hands of Real in the last 16 the previous year.

They remain unbeaten at home in the Champions League group stage since 2004 and they are already in control of Group A before facing Galatasaray and Club Brugge, who drew 0-0 on Wednesday.

"Everyone was saying how could we win with all these players out but maybe that meant we were not the favourites and it can also help when you don't feel too much pressure," Tuchel added.

Real remain far from convincing since Zinedine Zidane's return for a second spell as coach of the 13-time European Cup winners. There is still much work to be done if they are to go deep in this competition again after being humbled by Ajax in the last 16 last spring.

"PSG are a good team and created lots of chances but what worries me is that my team played without any intensity," Zidane lamented as his team failed to muster a shot on target.

"We didn't really ever get going. We usually create lots of chances and today, well we scored two goals but both were disallowed. Apart from that there was nothing."

They had a Gareth Bale goal disallowed for handball after a VAR review just after going two behind, while Eden Hazard struggled to make an impact on his first start since his move from Chelsea.

Madrid were also handicapped by the absences of Sergio Ramos, Nacho and Marcelo in defence as well as Ballon d'Or winner Luka Modric in midfield.

PSG, confusingly wearing white while the visitors wore dark blue, opened the scoring in the 14th minute when Di Maria latched onto a Juan Bernat cutback from the left byline and fired in.

Hazard shot just wide at the other end moments later and Bale curled a free-kick over the bar from the edge of the area. Just after that, in the 33rd minute, Di Maria took a touch and smashed a shot into the right-hand corner to make it 2-0.

Then came Bale's disallowed goal, and the Welshman came close again in first-half stoppage time, yet the Spanish giants created little in the second half apart from a Karim Benzema goal that was ruled out for offside.

Hazard, meanwhile, departed 20 minutes from time having failed to make his mark, and PSG scored again in stoppage time, Meunier exchanging passes with Bernat before finishing.

Both sides should still make it through but for now it is PSG, six months on from their horror show against Manchester United, who have more reason to be optimistic. Especially with so much firepower still to return.