I'd swap the Headingley drama for the Ashes - Stokes 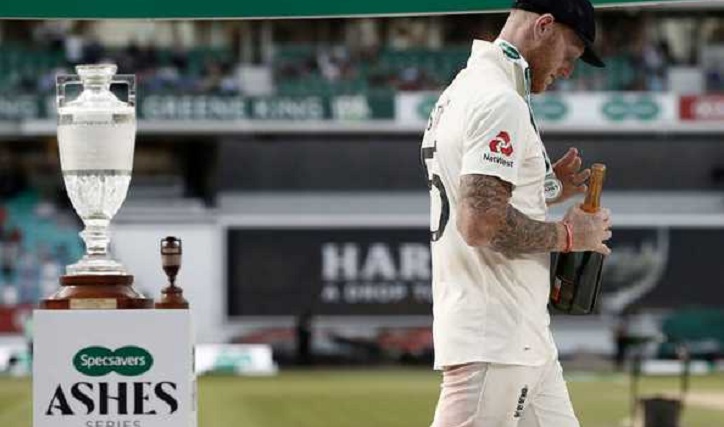 "It's been a blast," says Ben Stokes. It is hard to disagree.

The 2019 summer arrived with great expectations of a World Cup and Ashes. One was delivered at Lord's and, on Sunday, England made do at the Oval with celebrations of a victory in the fifth Test which did not change the fact the latter wasn't.

Over the last four months, English cricket has embarked on a journey of rediscovery with the public, and the man leading it all the way through - at times even lifting it onto his shoulders and carrying it part of the way - was Stokes. In doing so, the allrounder wrote perhaps the most engaging chapter of his legacy.

The 28-year old was England's player of the World Cup final and Ashes series, scoring 465 and 451 runs respectively. His five half-centuries in the tournament included a saviour's innings of 84 not out in the final; the two hundreds and two fifties against Australia included a 153 not out at Headingley that deserved to be defining.

Nevertheless, there seemed an air of fate about it all. That the player who had cost England in the 2016 World T20 Final could make amends so remarkably three years later in the ODI edition. And one who so foolishly risked it all on a night out in Bristol and was banned from the 2017/18 Ashes series, could come back so strongly here.

Stokes has put in a lot of hard work, both before and during this summer. On occasion, he has capped off a day's play with a set of sprints around the outfield. While there is a temptation to assume everything he does is to make up for his mistakes, part of the reason he has performed to such a level has been through keeping perspective. Even looking back on the accomplishments this summer, he retains it.

"Before England had played a game this summer we knew we had the World Cup and the Ashes ahead of us and now we're stood here at the end as World Cup winners and with a drawn Ashes series," he said as the confetti had settled on Australia's retention of the urn. "Obviously we'd like to have won it, but we haven't lost anything.

Between now and England's next engagement away to New Zealand, cricket will be far from Stokes' mind and daily routine. "I think my pads might already be in the bin!"

He will have about a month off to relax, refresh and, then, reminisce about what he has been a part of.

Already, though, there is a tinge of regret, as there ever is when a player of Stokes' mindset has to address defeat. And to have England in possession of the urn, he would happily give up the most remarkable innings he will ever play and one of the most memorable the game has ever seen.

"There have been some incredible highs and some moments that I can hardly believe happened, but they did and I will always be able to remember what it was like being out there in the middle when we won the World Cup or won at Headingley. But as good a day as that was, I would still swap that drama at Headingley for an overall Ashes win though.

"It probably hasn't all sunk in yet, but at some point I'll be able to look back with some satisfaction at what we managed to achieve as a one day team and a Test team this year.

"So many people have been in touch at various times during the summer, and that catch here at the Oval against South Africa feels like such a long time ago, but I guess that is where it all really started.

"It hasn't all been plain sailing because we had to dig ourselves out of a hole in the World Cup and then we had to scrap until the very last to get that trophy, but we got it.

"The same in the Ashes where we had to fight all the way to the end to get the draw, but we got it and I think that is something we can be so proud of. When things got tough, we didn't crumble, we stood tall to the end and showed the character in our dressing room."

As for the Test side, which at times has looked muddled this summer, Stokes has high hopes. The emergence of Rory Burns and the battling qualities of Joe Denly give the top order a degree of solidity. Stuart Broad, too, has had a summer to remember - one many were touting as his last. His 23 wickets - the most he's taken in an Ashes - made him the first Englishman to have four 20-plus series against Australia. He stepped up emphatically in James Anderson's absence.

"I think the Test side has done pretty well considering some of the difficulties and issues we've had such as the regular changes in the batting order," said Stokes. "It looks like we've found a formula in the last game or so that works for us and is something we can build on.

"Joe Denly has experience as an opening batter and did it for however long in his career and he now looks comfortable there. I think we've found something that works and hopefully we can stick with that so when guys get their opportunities down the line they can be consistent with their performances.

"A few people said a few things about Broady and maybe he was coming to the end of his career, but I think he's shown here that he's nowhere near done. The way he has bowled right from the start of this series, and with Jimmy not being available, has been heroic and we've all been impressed by his skill. He's set the tone for the bowling attack every time which is exactly what you want from your opening bowler, especially against someone like David Warner. The fact their opening partnership has gone nowhere is largely down to Broady."

As for his own spot, his returns mean batting him lower than five will be foolish. A shoulder injury meant he played the fifth Test as a batsman only at number four, scoring 20 and 67. Could that be his future, as a bowling number four, similar to Jacques Kallis?

"I'm not sure to be honest. It totally depends on the make up of the team and the balance of the team. It is an option clearly and this week because of my injury not allowing me to bowl we had to make adjustments and get a fourth seamer in. It is all about what Rooty (Joe Root) wants in terms of the balance