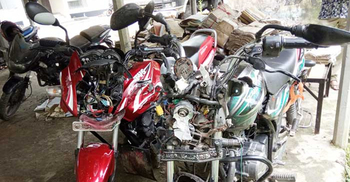 At least two people were killed and two others injured when two motorcycles collided head-on at Siddikhola area on Madaripur-Shariatpur highway of Sadar upazila in Madaripur on Wednesday noon.

The identities of the deceased and injured could not be known immediately.

Confirming the news, Mohammad Badrul Alam, additional superintendent of police (ASP) of Madaripur, said that a Madaripur-bound motorcycle from Bhurghata of Kalikini collided head-on with another motorcycle coming from opposite direction, leaving one person dead on the spot and three others injured.

The injured are undergoing treatment at the hospital, he added.