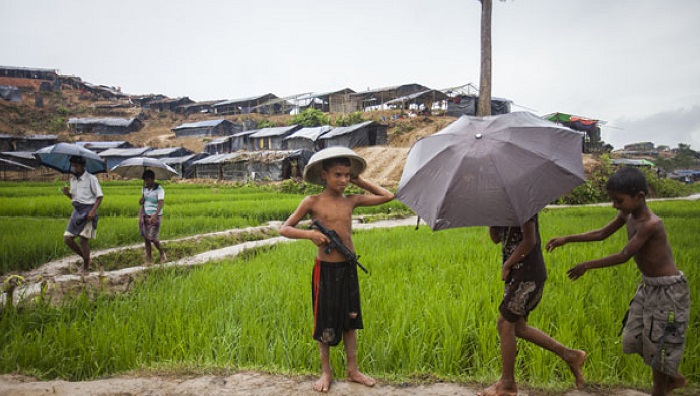 Outgoing Japanese Ambassador to Bangladesh Hiroyasu Izumi has said Rohingya issue is not an isolated phenomenon, rather deeply related with growing nationalistic political trend and the world must find a solution for Rohingyas.

“It goes without saying that the Rohingyas are also victims of prevailing egocentric nationalism or populism. Of course, I believe the world can never be a jungle,” he said, adding that the civilised world
must find a sustainable solution to bring justice to Rohingyas.

The Japanese envoy recalled that he had an opportunity to join a diplomatic tour to Cox’s Bazar Rohingya camp just three days after his arrival.

“It was a rainy day and the camp was so muddy, and the paintings that children drew were only in red, grey and black colors,” said the Ambassador who is scheduled to leave Dhaka on Thursday after completing his two-year tenure in Bangladesh.

Since then, he has visited the camp more than 10 times and witnessed a rapid growth and development in the camp.

The Ambassador said the camp still has to deal with old problems and new problems are waiting to be solved.

Despite various challenges, Ambassador Izumi said the drawings of the Rohingya children are now full of rainbow colors.

He deeply appreciated Bangladesh’s humanitarian response to the crisis.

“Bangladesh never built a fence on the border to block the Rohingyas, or never forcibly sent them back to the country where they came from, but on the contrary, willingly shared food with them and has tried to solve this difficult situation through diplomatic negotiations in a peaceful manner,” he said.

Observing the Rohingya crisis, he remembered the words of renowned British diplomat and author Edward Hallet Carr mentioned in his book “The Twenty Years Crisis”, in which he described the period between the World War One and Two.

“To sum up, he said that diplomacy must stand between realism and utopian thoughts (or idealism). In other words, neither idealism without understanding the reality of the world nor realism that forgets ideal vision of the world can be a ground for sound diplomacy,” said Ambassador Izumi.

Looking at the contemporary world, the envoy said, he cannot help but notice that the pendulum of the history has swayed to the extreme of the realist thoughts.

He said the word ‘globalism’ or ‘globalisation’ has sometime disappeared. “And the idealistic vision of the world order is somewhat dissolving. Political leaders of many countries start to say ‘Me First! My country is great!’ I am afraid that in such a world what awaits us.”

He said the strong always wins, and the weakest people are always suppressed. “Is this world a jungle? Bellum omnium contra omnes (a Latin phrase meaning the war of all against all)?”

And more than anything, the Ambassador said, it is important to give the light of hope for the future of Rohingya children by providing them with the opportunity of higher education.

“We should never create any lost generation among them. I would say our sympathy and support will be always with them,” he added.

Bangladesh is hosting over 1.1 million Rohingyas and most of them entered Bangladesh since August 25, 2017 amid military crackdown on them.

A recent report of UN fact-finding mission said the 600,00 Rohingya remaining in Myanmar’s Rakhine state face “serious risk of genocide” and that repatriation of the ones who have been driven out of the country by its military remain “impossible”.

The UN investigators further said Myanmar is confiscating and building on land of the displaced Rohingyas.

These alarming developments, foreign affairs experts say, might trigger further exodus of the Rohingyas into Bangladesh.