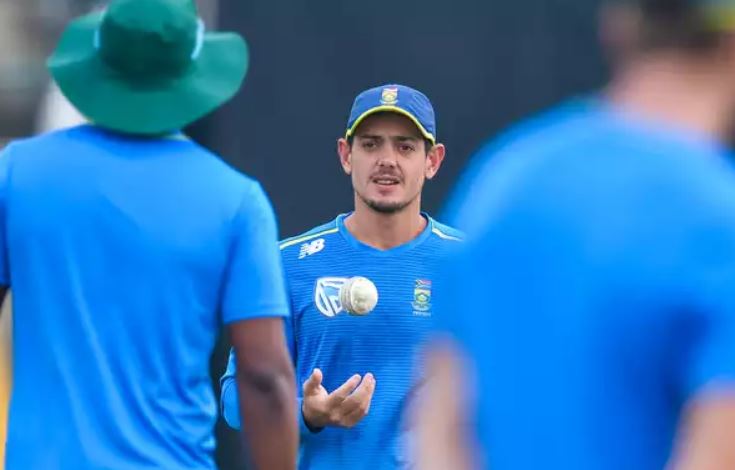 When Faf du Plessis injured his shoulder during the third ODI against Sri Lanka in 2018, Quinton de Kock was given the opportunity to lead his country for the first time.

Unfortunately, his brief captaincy stint didn't exactly go according to plan as South Africa lost both the games under his leadership.

However, as the saying goes, 'life always offers a second chance', and the wicketkeeper-batsman was named as the captain of South Africa for the three-match T20I series in India. The aggressive opener has also been praised for his tactical nous and "cricketing brain" by Ottis Gibson, the former head coach, and his teammate David Miller.

Ahead of the second T20I versus India in Mohali, de Kock reckoned that the mantle of leading the side was "just a new stepping stone" in his career and that he is ready to take the extra responsibility of leading his country. Incidentally, the first game in Dharamsala was washed out due to persistent rain.

"I'm not too concerned (extra responsibility of leading the side). It's just a new stepping stone in my career," he told reporters on Tuesday (September 17). "Just gives me a bit of extra responsibility in the team. We'll see how it goes - it can affect me negatively or positively - I'm not sure at the moment. Hopefully, it gives me the positive energy and I give the best I can do."

After a disastrous 50-over World Cup campaign, South Africa are trying to bring in a few fresh faces. Anrich Nortje, the 25-year-old, who bowls with a good burst of pace as well as all-rounders - Bjorn Fortuin and George Linde - would be looking to make an impact during the T20I rubber.

De Kock observed that he would look to continue on the good work of his predecessors like AB de Villiers, Hashim Amla and Faf du Plessis by giving the younger players freedom and a long rope in order to help them fulfil their potential.

"I think they (de Villiers, Amla and du Plessis) gave me lots of room to play the way I want. I don't see it why that would change without them here or not. Even they in their careers went through the same things that we're going through right now. So, we will take it as it comes."

"In the leadership group within the team we have discussions, we've had a chat about how we're going to go about things. So far it is under control but we are also still learning. We are still quite a young leadership team. Hopefully, when our careers finish, we will be... and the youngsters coming through would learn from our mistakes."

De Kock also said that he was looking forward to the eagerly-anticipated duel between Virat Kohli and Kagiso Rabada through the course of the tour. "They both are good players in their own right. It will be a good competition. They like being very positive in the way they play. It could be a great thing to watch.

"We just watched the Ashes and Jofra bowling. He's very aggressive the way he bowls and how Australia have batted. It's just been good cricket overall. I could only think good things would come up and it's going to be great for the fans to watch when there is so much competitiveness when two teams come together."