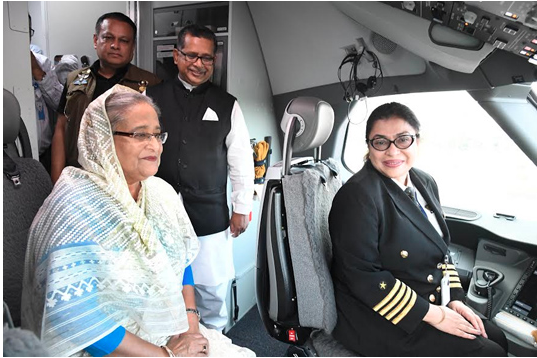 Hinting at purchasing two more Boeing aircraft for Bangladesh Biman, Prime Minister Sheikh Hasina asked the authorities of the national flag carrier to work with honesty and sincerity to ensure the quality of passenger services.

“Apart from the existing aircraft, three Dash Bombardier planes will be added to the Biman fleet. We have also got news that Boeing is interested to sell its two aircraft soon, the order of which was canceled by somebody else… we’ll take this opportunity,” she said.

The prime minister was addressing as the chief guest the induction ceremony of Biman’s 4th Dreamliner, ‘Rajhangsa’, at the VVIP Terminal of Hazrat Shahjalal International Airport (HSIA) here this afternoon.

In this connection, Sheikh Hasina said the country’s foreign currency reserve remains at a good position and there will be no problem to purchase two new Boeing aircraft.

Earlier, the premier formally commissioned the newly-procured state-of-the-art aircraft of the national flag carrier by cutting a ribbon at the VVIP Tarmac of HSIA.

After the inauguration, Sheikh Hasina boarded the aircraft, inspected it and talked to the pilots and the crew members.