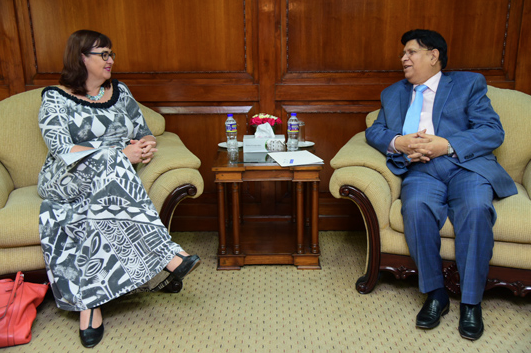 Momen made the urge while outgoing Non-resident New Zealand High Commissioner to Bangladesh Joanna Mary Kempkers paid a farewell call on him at foreign ministry, a press release said.

During the meeting, they discussed various bilateral issues including trade and investment as well as ongoing Rohingya crisis.

The foreign minister urged New Zealand to create pressure on Myanmar for commencing safe and dignified repatriation of forcefully displaced Rohingya from Bangladesh.

Mentioning that New Zealand is ranked top among 190 economies in the ease of doing business, the envoy said her country likes to share its experience with Dhaka to improve business climate in Bangladesh for attracting more foreign investment.

New Zealand is expecting a Bangladesh business delegation in November next that will help to further explore trade and investment opportunities between the two countries, she said.