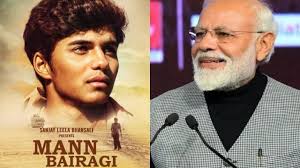 Akshay Kumar, who interviewed PM Modi in April before the 17th Lok Sabha Elections, shared the poster on his social media pages and wrote, "Happy to present the first look of Sanjay Leela Bhansali and Mahaveer Jain's special feature, Mann Bairagi (based) on the defining moment of our PM's life, on his birthday! #HappyBirthdayPMModi."

Mann Bairagi focuses on the life of PM Modi when he was a teenager and the years 'which changed his entire perspective of existence,' co-producer Mahaveer Jain informed, reports news agency IANS.

"He is a man dedicated to building our nation. We wanted to put forward that incident in his life when he was 17-18 which changed his entire perspective of existence," he said.

Mann Bairagi is directed by Ssanjay Tripaathy. "When Ssanjay Tripaathy came to Sanjay Bhansali Productions and me, all we thought of was the importance of what Ssanjay Tripaathy wanted to say. We believe Modi ji inspires millions of young people across the world. But what inspired him? When was that moment when he chose to dedicate his life to the service of the nation?" Mr Jain added.

When Mahaveer Jain was asked if PM Modi will watch their feature, he told IANS, "Modi ji doesn't like to read or watch content about himself. He is happy that we made the film, but he won't watch it."