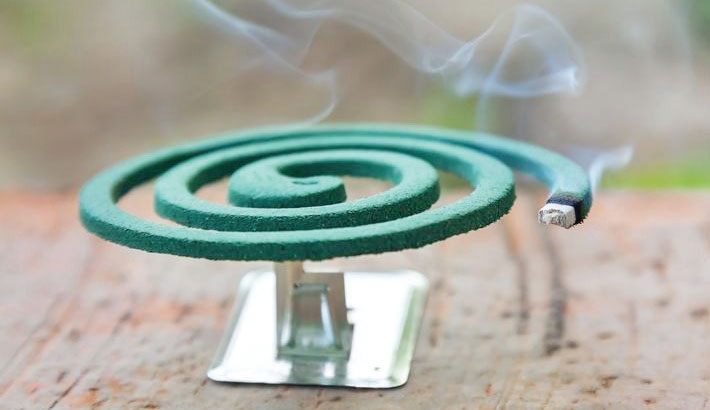 Substandard mosquito coils have flooded the market across the country including the capital under the very nose of the authorities concerned.

The swindling manufacturers of such mosquito coils are doing brisk business amid the lackluster market monitoring.

People are suffering from a variety of complex diseases due to fake and low-quality mosquito coils.

The available pesticides on sale are up to 3-5 times higher than tolerable level and very detrimental to public health.

Sources said some coils imported from China are also made with excessive health hazardous chemicals. The import does not follow any specified rules.

The Department of Agricultural Extension (DAE) approval is mandatory for producing, marketing and preserving mosquito coils, according to the Pesticide Ordinance 1971 and the Pesticide Rules 1985, but who cares?

Not only that, the approval of Bangladesh Standard and Testing Institution (BSTI) must be needed for this purpose.

In addition to pesticides in the crop, mosquito repellant is licenced by the Plant Protection Wing of DAE, but without any approval, mosquito repellant factories have mushroomed in various areas including Savar, Jatrabari, Tongi, Bhairab and Narayanganj, with no laboratory or chemist working for these factories. Most of those factories were built in a room of a house.

The manufactures market those fake and substandard products using fake BSTI logo and in the name of prominent companies.

Recently, mosquito coils of different brands in the market were tested in the laboratory of the Pesticide Quality Control of Plant Protection Wing under Department of Agricultural Extension (DAE) and found that low-quality pesticides have been used in their manufacture — up to 3-5 times higher than tolerable levels.

The World Health Organization (WHO) directs the use of a maximum of .03 percent ‘active ingredient’ in mosquito coils. But the toxic material in the mosquito coils prevailing in the markets is above 4 to 5 percent.

The most common active ingredients in coils are Permethrin, Bioallethrin, D-trans-allethrin, deltamethrin, metofluthrin and others.

Generics of different brands are used in the ingredients of these mosquito drugs. There are different types of drugs for each type of mosquito — adult or larvae.

Md Mosharrof Hossain, Additional Deputy Director (Pesticide Quality Control) Plant protection Wing of DAE, told daily sun: “Most of the pesticides used in the market mosquito coils are low quality. The result is the opposite of using these low-quality pesticides. Instead of killing mosquitoes, other animals are dying. Besides, they are also a threat to public health.”

He said: “Recently Bangladesh Standards and Testing Institution (BSTI) collected mosquito coils and sprays from different markets and send those to our lab for testing. We find that almost all mosquito coils have more insecticides than tolerable levels.”

Experts said people are suffering from various diseases including asthma, kidney disease and even cancer due to extreme use of low-quality pesticides in mosquito coils.

Sources said there are more than 150 listed companies importing and marketing about 600 types of mosquito coils and sprays.

New registrations for mosquito coil and spray production have been closed two years prior due to the spread of low-quality mosquito coils across the country.

“The interesting thing is that next time when the mosquito coil of the same company was brought from the market, it was found that ingredients in there are more than tolerable level,” he added.

He suggested using brand mosquito coil and avoid non-brand and low-quality ones.

On September 9, police seized around 42,000 fake coils from Boalmari bazaar in Faridpur district. All coils are using the logo of BSTI and a prominent coil company.

On July 18, Bangladesh Standards and Testing Institution (BSTI) filed a case against a man and jailed two others for marketing unauthorised and substandard mosquito coils of Dragon Brand and Anlu Brand at Mirpur in the capital.