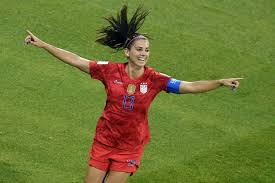 United States women’s soccer star Alex Morgan said Monday she would not play again this season as she aims to fix a knee injury that has bothered her since the World Cup.

The 30-year-old Orlando Pride forward, one of the most prominent players on the United States’ World Cup-winning team, made the announcement in a statement on her Instagram account.

“This year has had the highest of highs but along with that comes challenges and sometimes even falling short of my goals I set for myself in 2019,” Morgan wrote.

“I’m disappointed I won’t be able to compete with the Pride for the remainder of 2019 due to a knee injury I’ve been managing since the World Cup, and that I can’t be there to help my teammates and my club have more success.

“I have already started physical therapy in LA and am eager to get back on the field doing what I love.”

Morgan did not release further details of her injury.

The striker has been nursing the knock since she was substituted during the USA’s group game with Sweden at the World Cup in June.

She returned to feature in the remaining games of the tournament, however, scoring in the semi-final victory over England and playing in the final.

Morgan has had a history of knee injuries, suffering a torn anterior cruciate ligament as a teenager in high school at the start of her career, and undergoing keyhole surgery on her right knee in 2015.