US youngsters gear up for climate protests 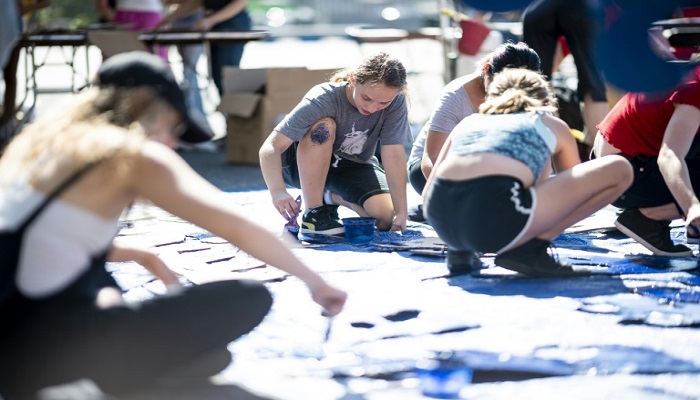 For years, teenager Nora Gell from New York had learned about the environment and recycling at school, but her commitment to protecting the planet ended there.

"When we went home, it didnt matter; it was a small issue that we could afford to ignore at that time," the 14-year-old told AFP.

Now, she is a full-fledged activist, one of a growing number of youngsters embracing a climate movement that is demanding that world leaders act now to save the planet.

The teenager plans to skip school on Friday to take part in an environment demonstration for the first time, alongside young Swedish activist Greta Thunberg.

"I feel like I have an obligation to do something," Gell tells AFP, fashioning cardboard cutouts of waves to hold aloft during this week's coordinated worldwide climate protests.

She is in part inspired by 16-year-old Thunberg's "Fridays for future" strikes which have seen students across Europe abandon classrooms every Friday to call on adults to commit to saving the environment.

"I know the sacrifices I make for this are 100 percent worth it," adds Gell.

She was one of several hundred youngsters who attended a workshop in Brooklyn on Sunday to make placards and banners for Friday's protest.

The waves symbolise rising sea levels in the world's oceans.

Thousands are expected to attend the rally outside the United Nations headquarters in Manhattan.

It is one of thousands of demonstrations happening around the globe ahead of a UN summit on zero emissions on September 23.

It is not known how many people will attend but celebrities and non-governmental organizations have called for large numbers of people to take to the streets.

Seventeen-year-old New Yorker Elijah Gutierrez will be there.

He has been handing out flyers at school and talking non-stop to fellow pupils to encourage them to join the march.

"It's just going to get bigger and bigger," Gutierrez, covered in blue paint from making waves, said of the global climate movement.

"As it gets bigger... the march on Earth Day 2020 is going to be huge," he added, referring to the 50th anniversary of Earth Day, which organizers hope will be the biggest ever.

Gutierrez has been able to convince ten kids to attend so far, but hopes he can get 20 by the end of the week.

New York authorities have given their blessings to the one million children in over 1,700 schools in the US financial capital to miss school for the event.

Gutierrez will vote for the first time in next year's presidential election and has been watching the Democratic debates closely to learn who is most committed to protecting the environment.

"Trump took us out of the Paris agreement... everything is kind of headed in the opposite direction we need to go," he said.

Gell doesn't expect leaders to act immediately after Friday's strike but expects they will be forced to in the long run.

"There will be more marches and more strikes, it's not just a one-time thing. It is going to take a lot of small steps," she said.