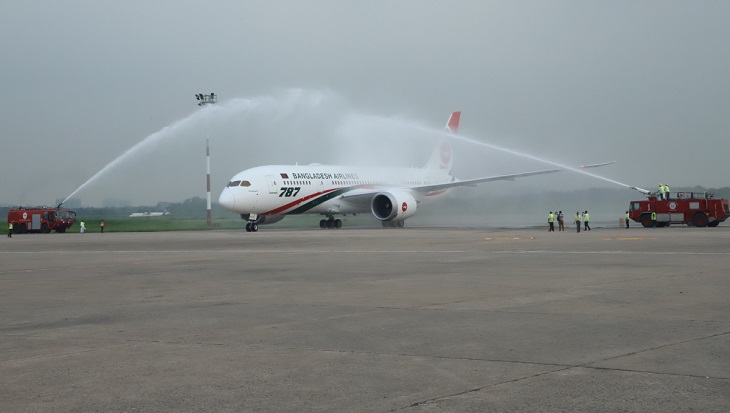 The Dreamliner touched the taxiway of Hazrat Shahjalal International Airport in Dhaka on Saturday afternoon directly from the USA’s Seattle’s Boeing Factory.

Four pilots of Biman led by its chief of flight safety Captain Shoeb Chowdhury operated the new aircraft on boarding the delegation from Seattle to Dhaka.

Earlier, the first and second Dreamliner Boeing 787-8, named as Akash Beena and Hangsabalaka respectively, arrived Dhaka on August and December last year while the third one known as Gaangchil arrived in July last.

In 2008, Biman Bangladesh Airlines signed a US$2.1 billion agreement with Boeing to purchase 10 new aircrafts.

Rajhangsha, the 271-seat Boeing 787-8, has been designed as 20 per cent fuel efficient carrier compared to the other aircrafts. The airliner has the capacity to fly 16 hours nonstop with an average speed of 650 miles per hour.

It will provide its passengers with Wi-Fi services at a height of 43,000 feet, allowing passengers to browse the internet or connect with their friends and family from any place of the world.