IS leader calls on fighters to free detained comrades 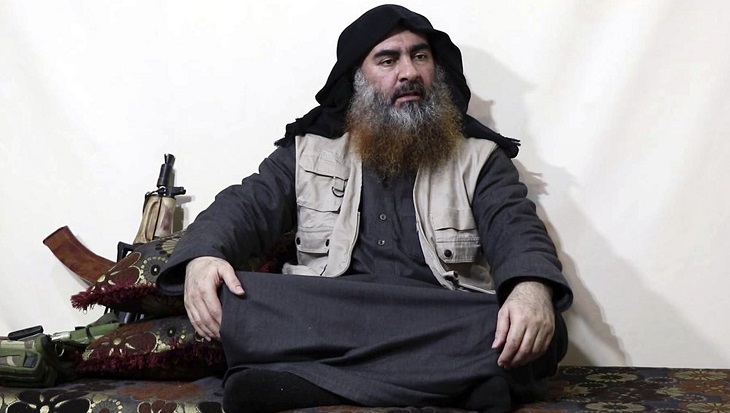 FILE - This file image made from video posted on a militant website April 29, 2019, purports to show the leader of the Islamic State group, Abu Bakr al-Baghdadi, being interviewed by his group's Al-Furqan media outlet. The leader of the Islamic State group released a new alleged audio recording Monday, Sept. 16, 2019, calling on members of the extremist group to do all they can to free IS detainees and women held in jails and camps. (Al-Furqan media via AP, File)

The leader of the Islamic State group released a new alleged audio recording Monday calling on members of the extremist group to do all they can to free IS detainees and women held in jails and camps.

The purported audio by Abu Bakr al-Baghdadi, in which he also said that his group is carrying out attacks in different countries, was his first public statement since April, when the shadowy leader appeared in a video for the first time in five years.

In the 30-minute recording released by a media arm of the group, Al-Furqan, al-Baghdadi asked: "How can a Muslim enjoy life?" when Muslim women are held in camps he called "prisons of humiliation run by Crusaders and their Shiite followers."

With a $25 million U.S. bounty on his head, al-Baghdadi is the world's most wanted man, responsible for steering his chillingly violent organization into mass slaughter of opponents and directing and inspiring terror attacks across continents and in the heart of Europe.

IS was defeated in Iraq in 2017, while in Syria, it lost its last territory in March, marking the end of the extremists' self-declared caliphate.

Despite these battlefield defeats, IS sleeper cells have continued to launch attacks in both Iraq and Syria.

Al-Baghdadi said in the new recording that militants should target interrogators and judges who are questioning IS members.

He also urged detainees and women held in camps to be patient. One of the largest camps is al-Hol camp in Syria's northeastern Hasakeh province. It's home to some 73,000 people, many of them families of IS who emerged from the group's last bastion in Syria. Tens of thousands of fighters and other members of the group are held in detention centers across northern Syria and in Iraq.

In Syria, the centers are controlled by the U.S.-backed Syrian Democratic Forces, which spearheaded the fight against IS in eastern Syria.