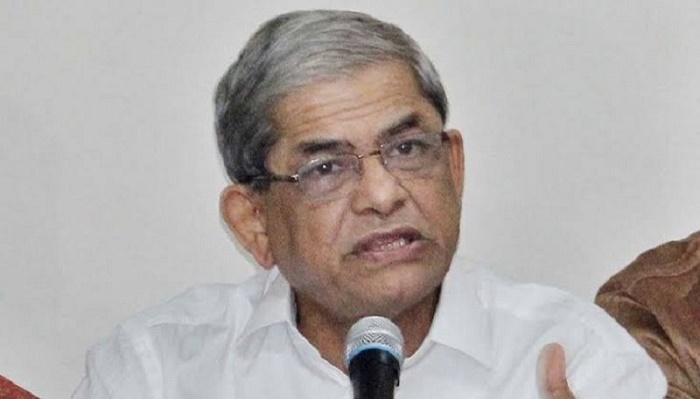 Stating that Bangladesh has ‘lost democracy’ due to changes in global politics, BNP Secretary General Mirza Fakhrul Islam Alamgir on Monday said Prime Minister Sheikh Hasina’s government has turned into a ‘puppet’ of the international community.

“This is not an isolated incident that Bangladesh lacks democracy as the county falls into overall political changes that are taking place across the world. The current government is snatching people’s rights with the help of the international community. In fact, it (govt) has become a puppet regime,” he said.

Speaking at a discussion, the BNP leader also said the government has been in power becoming a toy of those who are now controlling the global politics and economy. “That’s why Bangladesh can’t make strong diplomatic efforts to resolve Rohingya crisis and can’t register any protest though Indian politicians are saying to send 19 lakh people from Assam to Bangladesh.”

Nagorik Oikya, one of the components of Jatiya Jatiya Oikya, arranged the discussion at the auditorium of Bangladesh Shishu Kalyan Parishad, marking the International Day of Democracy.

Fakhrul regretted that though the government established ‘autocracy’ in the country, political parties cannot get united to put up a resistance against it.

He said Jatiya Oikya Front is active, and its components are working to reorganise their parties and organisations to take to the streets against the ‘fascist’ regime.

“I know other parties are also strengthening their organisational capacity. We hoped a unity of political parties will be created soon as per the desire of people. There’s no alternative to unity,” the BNP leader observed.

He also said it will not be possible to get success in the struggle to restore democracy and people’s rights if all the political parties don’t come together. “That’s why we formed Oikya Front before the national election and this unity is still intact.”

Fakhrul said the current government has taken a position against the country’s people as Awami League believes in one-party rule, not in democracy. “Awami League is a fascist force. The people of Bangladesh never accepted fascism and autocracy. So, I believe people must get united and restore democracy through united efforts.”

He called upon all the opposition parties in Bangladesh to work together putting aside differences of opinion and misunderstands to restore democracy ensuring the fall of the current government.

“It won’t be possible to oust this despotic regime with any isolated movement. All the democratic forces and left parties must create a greater unity and take to the streets to get rid of autocracy,” he observed.

Nagorik Oikya convener said though there is no democracy in the country, the ruling party leaders think democracy cannot be better than one exists here now as they are liars.