More than half died since rescue at Thailand Tiger Temple 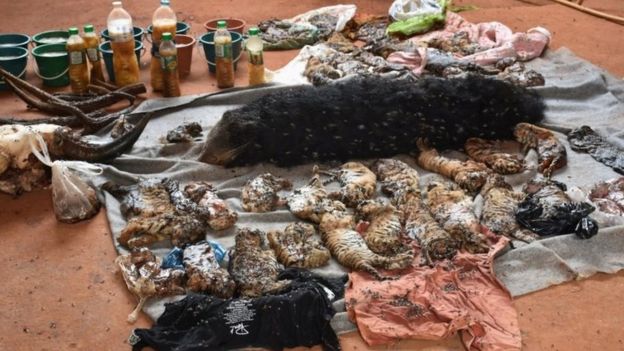 More than half of the 147 tigers which were rescued from a controversial Thai Bhuddist temple just three years ago have died, officials have said.

A total of 86 tigers have died since they were moved from the Wat Pha Luang Ta Bua temple, a tourist attraction known as Tiger Temple, in 2016.

Thailand's park service said many had died of a virus, having been weakened by the stress of relocation.

But conservationists have questioned whether authorities were holding the tigers in safe conditions.

The Wat Pha Luang Ta Bua temple's monks, meanwhile, have denied accusations of animal abuse, trafficking and illegal breeding while the tigers were under their care.

The temple has been closed to the public since 2016, and several legal cases are ongoing. 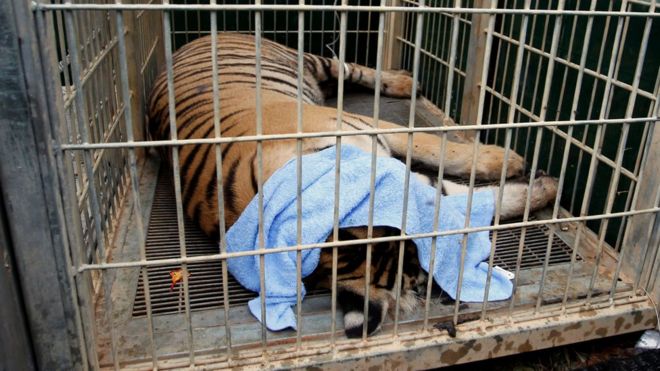 What happened to the tigers?

Since police raids in 2016, the tigers have been held at two breeding stations in nearby Ratchaburi province as it is believed they would have little chance of survival if released into the wild.

But only 61 of the original 147 have survived in state captivity. Thai authorities said some fell ill with Canine Distemper Virus or CDV. Many had difficulty breathing or eating, and died as a result.

Edwin Wiek, founder of the Wildlife Friends Foundation Thailand (WFFT), told the BBC the big cats were being kept in small, cramped cages, making it easy for disease to spread.

He added that CDV is curable with proper food and supplements, access to clean water, and enough space to move around. But a limited government budget made this impossible.

"To be very honest, who would be ready to take in so many tigers at once?" said Mr Wiek. "The authorities should have asked for help from outside, but instead insisted on doing all work themselves."

The deaths of so many tigers in two government facilities has refocused attention on the challenges of managing an ever-expanding population of captive tigers, not just in Thailand, but in neighbouring countries like Laos and China.

Despite pledges by both Thailand and Laos to reduce the numbers of tigers held in captivity on so-called "tiger farms", the populations have continued to rise.

There are now around 2,000 captive tigers in Thailand. Many are held by private individuals, not state institutions.

Captive tigers are a lucrative business, popular in particular with Chinese tourists who now make up nearly one third of foreign visitors in Thailand.

They breed easily, and there is always a suspicion that some are diverted into the illegal trade in tiger parts, which then encourages the poaching of SE Asia's dwindling population of wild tigers.

What is the Tiger Temple?

The attraction, run by Buddhist monks, was located in Thailand's Kanchanaburi Province, west of Bangkok.

At its height, visitors were charged 600 Thai Baht ($16, £11) for entry, with additional costs to pet or feed the tigers, or to take pictures with them.

Former workers have claimed that the tigers were beaten, inadequately fed, kept in small cages, and left in need of important medical care.

A National Geographic report alleged that the monks were operating a for-profit breeding business.

The WFFT also alleged there was evidence that wildlife trafficking took place, but has not provided specific examples.

In December 2014, authorities were alerted after three adult male tigers vanished from the temple. They had been micro-chipped, a legal requirement for captive endangered animals in Thailand, which allows them to be tracked.

The temple's veterinarian Somchai Visasmongkolchai later came forward after resigning from his post and said the microchips had been cut out of the three males.

When police raided the site in 2016, 40 dead tiger cubs were found in the temple's kitchen freezer, along with other animal body parts.