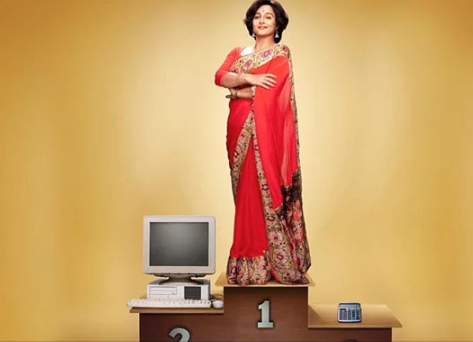 Vidya Balan released the first look of her much-awaited film Shakuntala Devi on social media on Monday. Along with the poster, the 40-year-old actress also shared the teaser of the film (more on that later). In the poster, Vidya Balan's character can be seen sporting a red saree and bob haircut. Going by the picture, it wouldn't be wrong to say that the actress shares an uncanny resemblance with the math wizard. Sharing the film's first look, Vidya Balan captioned it: "Excitement is multiplying each day! Time to dig into the 'root' of the mathematical genius, Shakuntala Devi." Shakuntala Devi was a mathematical wizard, known for her ability to solve difficult math problems with ease.

Shakuntala's genius was first discovered at the age of 5, when she solved a math problem for 18-year-old students. She also earned a place in the 1982 edition of The Guinness Book of World Records. Aside from her love for mathematics, she was an astrologer, cookbook author and a novelist. Shakuntala Devi travelled the world demonstrating her mathematical ideas - at colleges, in theatres, on radio and on television.

In a separate post, Vidya Balan shared the teaser of the film, in which her character as Shakuntala Devi is introduced as "sharp, arrogant, eccentric, ruthless, witty, outspoken and Ma Genius." Sharing the teaser, Vidya Balan wrote: "She was extraordinary in every sense of the word! Know the story of the child prodigy and the human computer. #Shakuntala Devi."

Earlier, in an interview with PTI, Vidya Balan opened up about his role as Shakuntala Devi and said: "I am extremely excited to play the human computer, Shakuntala Devi, on the big screen. She was truly someone who embraced her individuality, had a strong feminist voice and braved many a naysayer to reach the pinnacle of success."

The film on Shakuntala Devi is written by Anu Menon along with Nayanika Mahtani. It is scheduled to release next year.