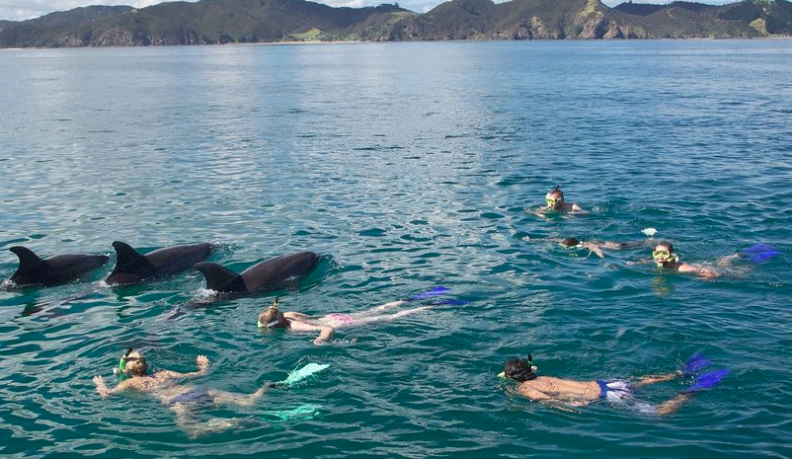 New Zealand has banned tourists from swimming with dolphins at its iconic Bay of Islands next to the North Island.

The popular tourist spot draws in visitors thanks to its resident, wild bottlenose dolphins which swim here.

Snorkeling here often means the chance to get up close to the creatures and other marine life, but according to authorities people are "loving the dolphins too much" and it's having an effect on the population of bottlenose dolphins that reside here.

Research has shown that the interaction with the marine creatures is having a significant impact on their behaviour, specifically when it comes to resting and feeding.

In fact, the Bay of Islands population has fallen by 66 per cent since 1999, with only a core group of 19 dolphins frequently visiting the area.

Now, swimming with dolphins is completely banned, and the rules have already come into effect.

Local authorities said that although there were already restrictions in place to limit interactions with the creatures, "the research shows they are inadequate to protect the animals".

That doesn't mean that you won't be able to see the dolphins at all if you are visiting the picturesque spot.

There will still be opportunities to take tours to see the dolphins, and while any swimming with the animals is prohibited, operators will be allowed a maximum of 20 minutes per trip for any interactions with the dolphins.

Authorities are also currently investigating a proposal to create a marine mammal sanctuary for the Bay of Islands as one of the ways to help the health of the dolphin population in the region.

Planning a trip and hoping to see some wildlife? Check out our guide on animal-friendly travel with expert tips on how to see creatures without harming them.