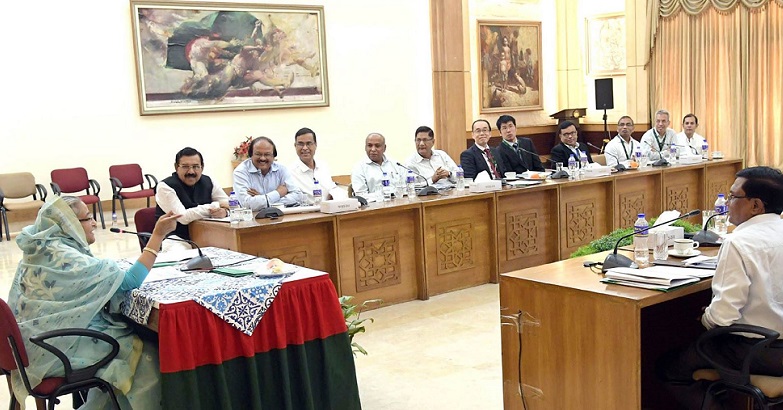 Prime Minister Sheikh Hasina on Monday stressed the need for formation of a separate police unit for ensuring security of metro rail.

The prime minister expressed this view during a power point presentation on the progress of the Mass Rapid Transit (MRT), popularly known as metro rail, in Dhaka at Ganabhaban this morning.

Managing Director of the Dhaka Mass Rapid Transit Company (DMTCL) MAN Siddique highlighted through the power point presentation on overall progress of the implementation of the “Time Bound Action Plan 2030 for Construction of the MRT Lines in Dhaka City and its adjoining areas”.

He projected the progress of MRT Line 6 as well as MRT Line 1, 2, 3, 4 and 5 through the power point presentation.

The metro rail project, the first of its kind in the country, is being implemented by the state-owned DMTCL in collaboration with Japan International Cooperation Agency (JICA).

At the meeting, the prime minister gave some directives to the authorities concerned for smooth and speedy implementation of the mega scheme.

It was informed at the review meeting that overall progress of the works of the MRT Line-6 (Uttara-Agargaon-Motijheel) till August was 30 percent.

The MRT-6 Project is being executed at a cost of about Taka 22,000 crore. Of the amount, the JICA is providing Taka 16,500 crore to the project, while the rest of the fund would come from the Government of Bangladesh (GoB), official sources said.

The fast moving metro rail will run from Uttara and Motijheel via Mirpur and Farmgate, carrying 60,000 passengers in an hour touching every station once in every four minutes.

Once MRT-6 Project is in operation, the city’s commuters would enjoy their much-awaited ease in the traffic movement, getting rid of the perennial congestion of the transportations on the roads of the gradually expanding city.

The people could reach Bangladesh Bank from Uttara within 38 minutes.

Besides, the pedestrians would feel further free in their movement on the city’s footpaths while walking down to respective destinations as the newest mode of transport would carry the main load of the travelers every day.