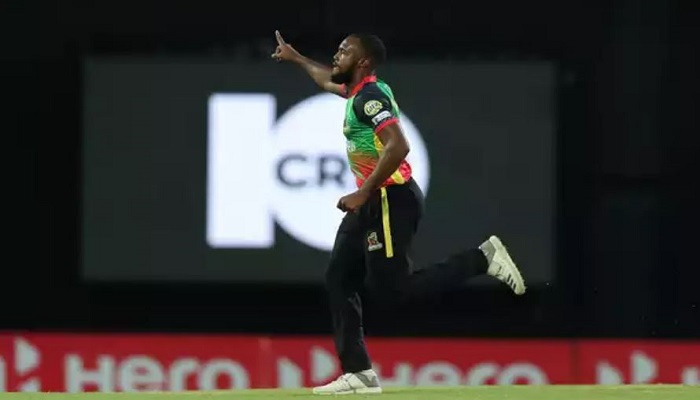 Jordan picked up a wicket in each of his four overs to finish with figures of 4 for 33 that restricted Zouks to 138/9, which was chased down with ease by the home side.

The day belonged to Jordan though who finished with the second-best figures ever for a CPL debutant. He took just three balls to strike as Andre Fletcher slapped a short and wide delivery straight to backward point. In his second over, he got the big wicket of Rahkeem Cornwall who had just picked up a boundary before his dismissal. In his attempt to smash the ball again, Cornwall got a thick outside edge that flew to third man where Sheldon Cottrell took a nice low catch.

Jordan continued to bowl in the powerplay and started off his third over with two successive boundaries as Kavem Hodge looked to take charge. Unfortunately, a short ball proved to be his undoing as Jordan had the last laugh. The batsman took on the short ball and found the only fielder at the deep midwicket boundary to leave his side reeling at 39 for 3 after five overs.

The procession continued as Usama Mir rounded off the powerplay with the fourth wicket of the innings. Patriots never recovered from the setback wickets continued to tumble at regular intervals. Post Thisara Perera's dismissal, Colin de Grandhomme took on the bowling attack to fetch a few boundaries but Mir got rid of the New Zealand allrounder and bowled a wicket maiden in the 12th over to stamp his side's authority.

Jordan then came back to add one more to his tally as Patriots scratched their way to 138 in their allotted overs. Devon Thomas didn't last beyond eight deliveries in the innings as he found the third man fielder to perfection but at the other end, Lewis enjoyed a lot of luck as he was dropped once each in the first couple of overs. He made the opposition pay by fetching a couple of sixes in the next four deliveries immediately after the drop.

Laurie Evans and Lewis then took on Hardus Viljoen as they took him apart for 20 runs in a single over. Fawad Ahmed the bowled a beauty to get rid of Evans just before the end of the powerplay but with the scorecard reading 62/2 after the six-over mark, Zouks needed something special to pull off a win. The hopes quickly vanished as Mohammad Hafeez slammed back-to-back fours off Kesrick Williams with Lewis ending the same over with a four and a six.

Patriots were content on playing out Fawad and targetted the rest. Lewis reached his half-century with a six over deep square leg and went on the rampage adding one more six and two fours off the next three deliveries. The assault ended in the same over when a mistimed shot ended his sublime innings. But with only 21 more runs required off nine overs post Lewis' innings, victory was only a mere formality.