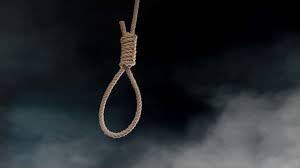 A sweeper of Upazila Livestock office was found hanging at the office of Sadar upazila in Pabna on Monday.

The deceased was identified as Selim Reza, 25, son of Tujam Uddin of Char Gorgari village in the upazila.

Mahmudul Islam, a livestock officer of district Livestock office, said Nazmul Hossain, a veterinary doctor, entered the office in the morning and found Selim hanging from the ceiling of the office.

On information, police recovered the body and sent it to local hospital morgue for autopsy.

Selim might have committed suicide by hanging himself from the ceiling of the office sometime in the morning, said Mahmudul.