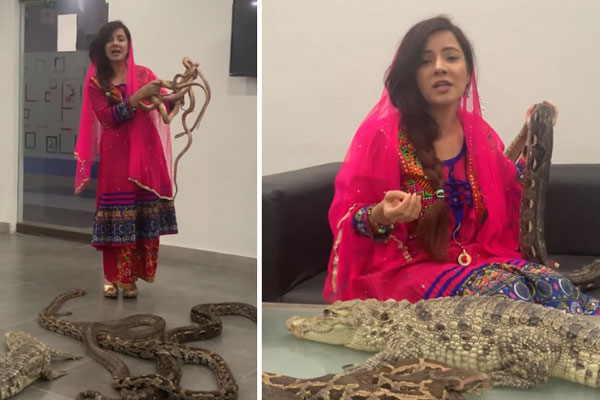 A legal action has been initiated against a Pakistani pop star for keeping exotic animals as pets in her beauty salon in Lahore after she uploaded a video of her threatening Indian Prime Minister Narendra Modi with a python on her social media pages.

In the video, singer-turned-host Rabi Pirzada threatened Modi, saying that the alligator, four pythons and snakes are "special gifts" for the Indian prime minister who, she said, would feast on him.

"I, a Kashmiri lady, is ready with her snakes for India. These gifts are for Modi actually. You are bothering Kashmiris so this is what I have prepared for you. So, get ready to die in hell, okay? And my friends [the exotic animals] would feast on you in hell," she said.

As Rabi Pirzada uploaded the video on her social media pages and were telecast by a private channel, the Punjab Wildlife Protection and Parks Department initiated a legal action against her for keeping exotic animals at her beauty salon.

The department has also presented a challan against Rabi Pirzada in a local court in Lahore for violating the Wildlife Act.