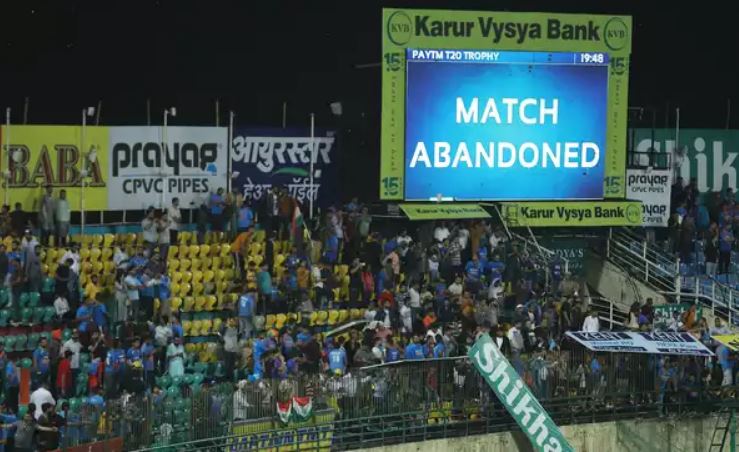 The first T20I between India and South Africa in Dharamsala was called off due to incessant rain without as much as the toss taking place.

The weather had remained similar for a couple of nights leading up to the game as well, with afternoon showers even washing out India's lone outdoor practice session on the eve of the match. The forecast remained similar for the match day as well, though it was expected to clear off before the scheduled start of play. However, there was no such relief. With steady rain starting around afternoon persisting till late evening, and intermittent clear skies, major part of ground still remained firmly under covers even at the scheduled time of toss.

A healthy crowd that had turned in despite the inclement weather conditions had to leave disappointed despite staying in for a couple of hours, with no official word on a refund. With the rain not relenting, the match was officially called off at 7:45pm IST.

The match comes in the early stages of preparation, for both teams, leading up to the T20 World Cup next year. India had questions around their opening combination as well as spin combination while South Africa, with as many as four potential debutants in the squad, and under a new captain have a keen eye on the way forward.

The experimentation with personnel will now have to wait for the next game in Mohali on September 18, Wednesday.