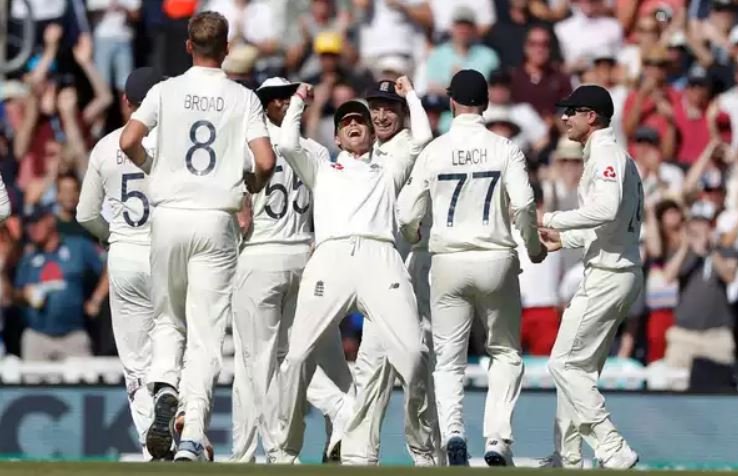 England finally achieved what they haven't been able to in this entire Ashes series - dismiss Steve Smith before he got to a fifty. To go with the three wickets that they managed in the first session on Day 4 of the fifth Test at The Oval and the big one after Lunch, England were well on their way to square the series and secure crucial World Test Championship points.

Matthew Wade resisted with a fighting half-century and remained unbeaten at Tea on Sunday (September 15) but with Australia at 167 for 5 in a chase of 399, England were calling all the shots.

Having reduced Australia to 68 for 3 at the end of the first session, it didn't take England too long to strike after Lunch. And it was the biggest strike of the innings as Stuart Broad forced Smith to play into England's plans. With a leg gully in place, Broad bowled a short of length delivery into Smith and the batsman ended up tickling it to Ben Stokes to depart for 23 - the first time he failed to cross 50 in this series.

Matthew Wade then decided to counter-attack, taking on Leach as he scored three successive fours in an over. Mitchell Marsh, meanwhile, had a lucky break as Chris Woakes - who had found the edge that travelled to the hands of the gully fielder - had overstepped. Such was the magnitude of Smith's dismissal that the partnership between Wade and Marsh went almost unnoticed, although they were doing a steady job of keeping the England bowlers at bay. Marsh got his second reprieve when Rory Burns put down a one-handed take at gully, with Woakes being the unlucky bowler again.

Riding his luck, Marsh supported Wade in a half-century partnership, with the latter bringing up his fifty as England's bowlers appeared to have lost their intensity a bit following the dismissal of Australia's No. 4. Root decided to bring himself on and the move worked immediately as Marsh guided an innocuous delivery into the hands of Jos Buttler at short leg, bringing an end to a 63-run stand. Leach almost got the wicket of Wade in the last over before Tea, with the batsman deciding to go aerial, but the ball landed just short of Sam Curran at deep mid-wicket.

Earlier in the day, a couple of lusty blows from Stuart Broad helped England extend the lead after Jofra Archer was dismissed by Pat Cummins, with Tim Paine finally opting for the review. England, though, ended up two short of a 400-run lead as Leach, in his attempt to take on Nathan Lyon, gave the spinner his fourth wicket as England's innings ended at 329.

Broad then troubled the struggling pair of Marcus Harris and David Warner, who despite managing a few boundaries between them and bringing up Australia's highest opening stand in this series, managed only 18 in partnership before falling in quick succession. Harris had no answers to Broad's around the wicket angle and scrambled seam, as he was cleaned up by the bowler, who went on to get his bunny Warner for a record seventh time in a series, by finding the outside edge.

Despite the early wickets, Smith was untroubled as he handled the pacemen with ease and even creamed a few drives without much footwork. Meanwhile, Sam Curran, who was shaping the ball away from the right-handers and also getting them to straighten on a few occasions, tested Labuschagne with his outside-off lines and even went past the edge a few times. Leach managed to trouble Smith a couple of times and his reward came in the form of Labuschagne's dismissal when he forced the batsman out of the crease with a flighted delivery to have him stumped.