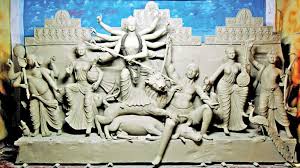 Erection of idols of goddess Durga continues in full swing making artisans busy as preparations are afoot to celebrate the upcoming greatest religious festival Durga Puja of the Sanaton community in the district.

Of them, 164 Durga Puja mandaps are being erected at different places under six police stations under the jurisdiction of Rangpur Metropolitan Police (RpMP) this year.

“Preparations are continuing in full swing amid huge enthusiasm to celebrate the five-day Durga Puja festivity with due religious fervour, gaiety and solemnity in Rangpur city, three municipalities and eight upazilas of the district,” Ajay said.

Beginning with the ‘Shosthi Puja’ from October 4 next, the celebrations of the festival will end on October 8 next through celebration of the Bijoya Dashami with immersion of the idols of goddess Durga.

Commissioner of RpMP Abdul Alim Mahmud said adequate measures would be taken to ensure peaceful celebrations of the greatest religious festivity of the Sanaton community in all 164 Durga Puja mandaps within the RpMP jurisdictions.

Police Super Biplob Kumar Sarker said the Durga Puja festivity will be celebrated at all mandaps amid tight security measures in the district this year.

Talking to BSS, artisans Nikhil Roy, Harish Chandra and Manoranjan Paul at different Mandirs in the city said they are currently their busiest time to timely complete erection of the idols of goddess Durga with artistic creativity and colours.

Artisan Rothindra Nath Roy, Shyamol Kumar Paul and Biswanath Paul said they began erecting the idols of Mother Durga at 25 Puja Mandaps in the city adjoining areas a couple of weeks back.

“After completing most of the works, we are working now round the clock to give finishing touches superbly to the idols with different colours to make those more charming, aristocrat and beautiful,” Biswanath added.

Talking to BSS, General Secretary of the district unit of BPUP Dhiman Bhattacharya said erection of the idols of Mother Durga continues superbly everywhere in all eight upazilas, Rangpur city and three municipalities of the district.

He expressed satisfaction over the steps being taken by the district, RpMP and district police administrations for ensuring peaceful celebrations of the upcoming Durga Puja festivities across the district.

District Relief and Rehabilitation Officer Faridul Haque said the government will soon allocate general relief rice for distribution among the Puja mandap authorities to assist the Sanaton community celebrating their Durga Puja festivity in the district.