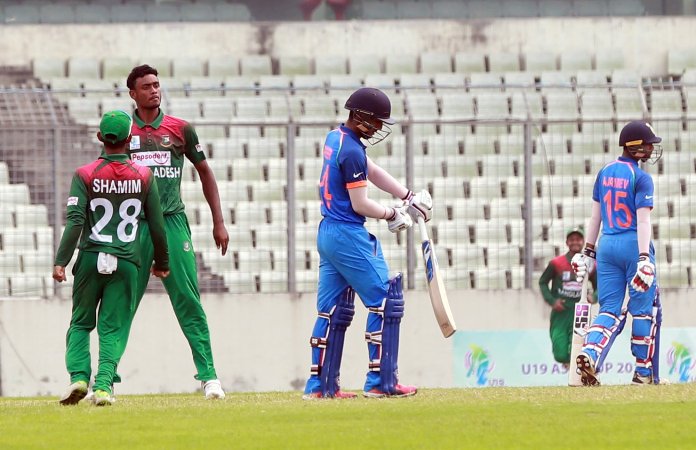 Bangladesh Under-19 National Cricket team failed to clinch the Asian Cup title as they conceded defeat against mighty India in the final of the Asian Cricket Council (ACC) Under-19 Asia Cup at R Premadasa Stadium in Colombo on Saturday.

This is India's seventh triumph in the continental tournament for junior cricketers.

It was a tougher job by any means as Junior Tigers were in perpetual losing streak against their Indian counterparts.

Earlier, Bangladesh also conceded defeat against India in last edition of the tournament’s semifinal and more recently in England in the Tri-nation tournament final.

Bangladeshi bowlers restricted India to 106 runs in 32.4 overs with their brilliant bowling performance.

Only three Indian batsmen managed to reach double-digit scores. Captain Dhruv Jurel and all-rounder Karan Lal made 33 and 37 respectively to take India to 106.

Pacer Mrittunjoy Chowdhury and off-spinner Shamim Hossain picked up three wickets each, while there were also a couple of run-outs, as the Indians were bowled out in 32.4 overs.

After restricting India to an easily reachable total, Bangladesh struggled to chase the target as they lost couples of early wickets.

Opener Tanzid Hasan (5 off 3) was given out lbw in the very first over of Akash Singh while Parvez Hossain Emon (0 off 4) was caught out as he made poor shot selection in the next over of India bowler V Patil.

Batsman Mahmudul Hasan Joy, Towhid Hridoy, Shahadat Hossain and Shamim Hossain followed the footsteps of the openers. None of them were able to reach the double figure mark with the bat.

At one stage, Bangladeshi batsman managed to score just 51 for 6 after 14.2 overs. Prior to that, Junior Tigers scored only 17 runs after the end of the first five overs.

Later, Bangladesh skipper Akbar Ali (23 off 36), Mrittunjoy Chowdhury (21 off 26) stabalised the team for the time being. But they failed to finish the game.

Skipper Akbar Ali was too impatient to bat in a careful way. Indian bowler AV Ankolekar took the advantage to remove him from the crease as he took a magnificent catch off his own bowling in 21st over of the match.

In the next over, Mrittunjoy Chowdhury, who looked well with the bat, followed the footstep of his skipper.

Later, tailender Tanzim Hasan Sakib (12 off 35) and Rakibul Hasan (11 off 34) tried their best but failed to reach the destination.

V Patil and SS Mishra managed to pick up one wicket each as the India Under-19 National Cricket team sealed the Asia Cup trophy for seventh times.