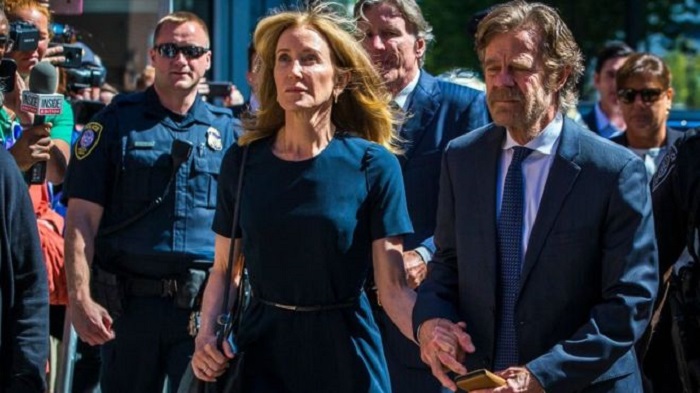 US actress Felicity Huffman has been sentenced to 14 days in prison for her involvement in a college admissions scandal.

Parents and athletic coaches were among the 50 people charged in the scheme, but none of the children were indicted.

"There are no excuses or justifications for my actions. Period," Huffman said in a statement after her sentencing. "I would like to apologise again to my daughter, my husband, my family and the educational community for my actions.

"And I especially want to apologise to the students who work hard every day to get into college, and to their parents who make tremendous sacrifices supporting their children."

Judge Indira Talwani said she believes Huffman has accepted full responsibility for her actions, but "trying to be a good mother does not excuse" what she did.

She must report to prison in six weeks. Prosecutors had asked for a month in prison and a $20,000 fine.

The parents charged in the college scam investigation allegedly paid bribes, had exams altered, and even had their children edited into stock photos to fake sporting talents on applications.

Prosecutors say they managed to fraudulently secure spots for the teenagers at elite US universities including Yale, Georgetown and Stanford.

Huffman pleaded guilty to mail and honest services fraud in May. She is the first parent sentenced in the scandal.

Her legal team had asked for a year of probation in lieu of jail time, 250 hours of community service and a $20,000 fine.

But prosecutors wrote in a memo last week that "neither probation nor home confinement (in a large home in the Hollywood Hills with an infinity pool) would constitute meaningful punishment or deter others from committing similar crimes".

What did Huffman do?

Singer arranged for Sophia to take her SAT test in a special location, an exam widely used for college admissions in the US. Her result was a major improvement on her previous score.

In a letter to Judge Talwani, Huffman wrote: "In my desperation to be a good mother I talked myself into believing that all I was doing was giving my daughter a fair shot."

"I see the irony in that statement now because what I have done is the opposite of fair. I have broken the law, deceived the educational community, betrayed my daughter and failed my family."

Huffman said in her letter to the judge that her daughter had been unaware of the fraud, and was devastated to learn of it.

The actress wrote: "When my daughter looked at me and asked me with tears streaming down her face, 'Why didn't you believe in me? Why didn't you think I could do it on my own?' I had no adequate answer for her.

"I could only say, 'I am sorry. I was frightened and I was stupid.' In my blind panic, I have done the exact thing that I was desperate to avoid.

"I have compromised my daughter's future, the wholeness of my family and my own integrity."

Prosecutors said Huffman made arrangements to have Singer cheat for her younger daughter as well before deciding against it.

Though Huffman was among the most high-profile figures indicted, she paid among the smallest sums allegedly doled out by the parents charged in the scandal, according to court documents.

Lori Loughlin, another Hollywood actress ensnared in the scandal along with her husband, has pleaded not guilty to paying $500,000 in bribes to have their daughters accepted to the University of Southern California as members of the rowing team.

Loughlin is next due in court on 2 October.