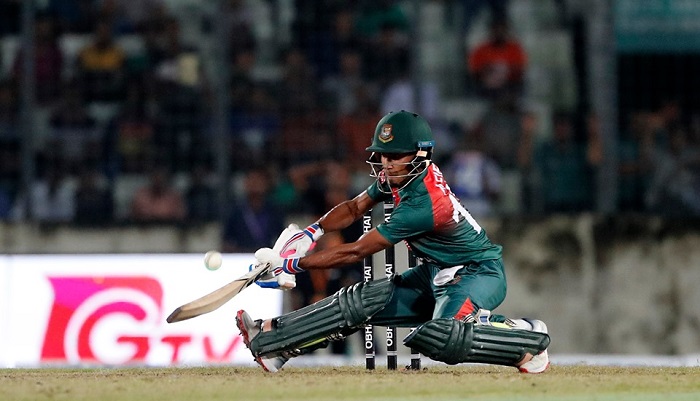 Young tiger Afif and Mosaddeq cruised Bangladesh to the land of victory against Zimbabwe in the opening match of the Tri-nation T20 series on Friday at Sher-e-Bangla National Cricket Stadium in Mirpur.

Afif Hossain’s stunning fifty (52), in his second T20, gave an 82-run partnership at seventh wicket stand with Mosaddeq Hossain that revived a devastated Bangladesh from 60 for six as it was chasing 145-run target to win set by touring Zimbabwe.

Afif smashed 52 off 26 with eight fours and one six while Mosaddeq batted for 30 off 24 with two sixes accompanying young partner to play shots.

The match was delayed by one and a half hours due to rain and was reduced to 18 overs aside. Zimbabwe lost the toss and was sent to bat first.

They posted 144 for five riding on the fifty of Ryan Burl. Bangladesh chased the target of 145 with the help of Afif’s fifty in 17.4 overs. Bangladesh ended on 148 for seven.

Bangladesh started chasing in a negative manner as they lost four wickets while going to 29 from 26 balls.

Tendai Chatara took the first wicket when Liton Das (19 off 14) was bowled off a yorker. In the next ball, Kayle Jarvis took scalped Soumya Sarkar for four.

Right after losing both openers, Bangladesh lost Mushfiqur Rahim and Shakib Al Hasan in quick succession as well. While Shakib scored one before getting dismissed by Chatara’s outswinger, Mushfiq fell for a golden duck- which is his second in two weeks, the first one was against Afghanistan in the first innings of Chattogram Test.

In the fifth wicket stand, Mahmudullah and Sabbir Rahman added 27 runs but it was not enough to rescue the Tigers from the disaster.

Within four runs, both of Mahmudullah and Sabbir fell prey to Burl and Neville Madziva. Burl took a stunning catch at deep to remove Sabbir who was looking to play a big knock.

After losing six wickets for 60, Bangladesh got a lifeline when Mosaddek Hossain and Afif Hossain added 82 runs off 47 deliveries in the seventh wicket stand to win the game for the Tigers.

For Zimbabwe, Jarvis, Chatara and Madziva took two wickets each while Burl took one wicket.

Afif got out when Bangladesh needed three more runs to win. Saifuddin came to the wicket and scored six off two deliveries to wrap up the game for the Tigers.

Earlier, Zimbabwe posted 144 for five in 18 overs with Bangladesh captain Shakib conceded an expensive 30 runs in his last over, which is his most expensive over in T20s.

Ryan Burl hit three sixes and as many as fours in last overs of Shakib as he completed his four overs conceding 49 runs.

The Zimbabwe innings was interrupted by a sudden power cut at 9:17 pm and the match remained paused for nine minutes.

Bangladesh started well as Taijul Islam, the debutant, removed Brendan Taylor for six. The former Zimbabwean captain went to sweep Taijul but ended skying the ball. He fell into the trap of turn off Taijul. Mahmudullah Riyad took a regulation catch at short third man area.

However, Zimbabwe managed the initial damage with care as the posted 48 runs inside the power play riding on the bat of Hamilton Masakadza. He hit 30 off 20 balls with five fours and one six in the power play.

In the very next over after the power play, Mustafiuzur Rahman removed Craig Ervine for 11 off 15 as Mosaddek picked up a wonderful catch at the deep. The ball was short and Ervine tried to pull it off to the boundary but failed to execute properly.

Zimbabwe failed to continue their inspiring start as they lost five wickets just in 66 runs. They lost the third wicket when Masakadza drive to the mid-wicket and Sabbir Rahman took a stunner off Mohammad Saifuddin.

Zimbabwe captain posted 34 off 26 before falling prey to Saifuddin in eighth over. In the very first ball of next over off Mosaddek, Sean Williams prodded a return catch and got dismissed for two.

But in the sixth wicket stand, Zimbabwe added 81 runs with the help of Tinotenda Mutombodzi and Ryan Burl. Tinotenda remained not out for 27 while Burl remained unbeaten for 57 off 32 balls, hitting only fifty for Zimbabwe in the innings.

For Bangladesh, Taijul, Saifuddin, Mustafiz and Mosaddek took one wicket each.

Bangladesh will face off Afghanistan on September 15 at the same venue while Zimbabwe will take Afghans tomorrow (Saturday).