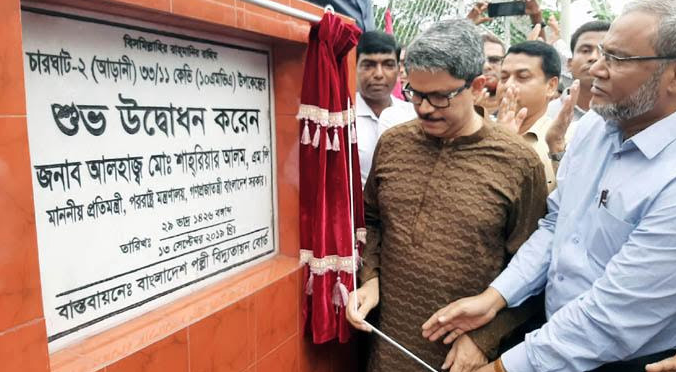 State Minister for Foreign Affairs Shahriar Alam  said on Friday the government under the dynamic leadership of Prime Minister Sheikh Hasina has attained tremendous success in both power generation and its supply.

“Cent percent power coverage has been attained in most of the villages due to the government’s relentless efforts,” he said while addressing a public meeting to mark the inauguration of a power substation in Ramchandrapur area under Bagha Upazila in the district as the chief guest.

The Bangladesh Rural Electrification Board (BREB) installed the ‘Charghat-2 (Arani) 33/11 KV (10 MVA) substation aims at improving the power distribution system in the area.

The state minister said power supply is indispensable and there is no alternative to it for accelerating the country’s development and production coupled with improving living and livelihood condition of the people.

For this reason, the present government has attached the highest priority to the sector and has been implementing massive and effective projects.

He said the previous massive power debacle and load-shedding has been reduced to a greater extent. At present, people of the country don’t experience erratic power supply, he said adding that the government has implemented prompt, short, medium and long-term plans which have helped the power sector attain unprecedented success.

He said the present government has increased power generation to 22,000 megawatts from the previous 3,200 megawatts.