BJP's Chinmayanand, accused of rape, will be questioned: Police sources 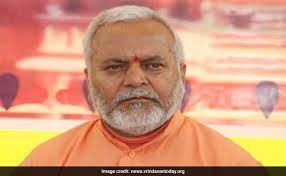 The allegation of rape by a law student in Uttar Pradesh against senior BJP leader and former union minister Chinmayanand will be investigated thoroughly, said a senior police officer, who asked not to be named.

"It's incorrect to say we won't investigate Chinmayanand. We summoned him three days ago to appear for questioning, but we were told there are some health reasons. We hope to interrogate him in the next few days," said the police officer.

The law student has alleged that she was filmed, blackmailed and raped repeatedly by Chinmayanand, who has not been questioned by the police so far. No complaint has been registered against the politician either.

"Media reports say we interrogated the girl for over 11 hours. That's not true. We spoke to her father for about five hours and then the girl (accompanied by her father) for another four-five hours. We are treating her as a victim and we did not interrogate her, but tried to help her to plug any loopholes in her statement," the police officer said.

Sources say in a statement to the Delhi Police and magistrate, the 23-year-old woman has described what she alleges was a year of sexual assault by the politician, who runs several ashrams and educational institutions.

She has reportedly repeated the allegations before a Supreme Court-appointed Special Investigation Team (SIT), which has questioned her for some 15 hours and has seen videos given by the woman.

"We are aware of the videos that are viral on WhatApp, and are also aware of the girl's complaint against Chinmayanand. We will definitely question him and take all other action that may be required. We have to submit a status report to the Allahabad High Court on September 23," the police officer said.