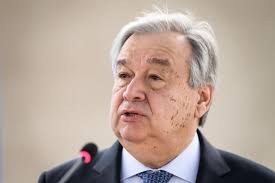 “Such steps, if implemented, would constitute a serious violation of international law,” Guterres’ spokesman Stephane Dujarric said in a statement.

“They would be devastating to the potential of reviving negotiations and regional peace, while severely undermining the viability of the two-state solution,” he said.

Netanyahu’s controversial pledge involves extending Israel’s sovereignty over the Jordan Valley and the northern Dead Sea, which account for one-third of the West Bank, if he wins next week’s elections.

It would not include however annexing any Palestinian cities such as Jericho.

The pre-election promise late Tuesday drew immediate condemnation from Arab powerhouses with many warning — like Guterres — of disastrous consequences for the stagnant Israeli-Palestinian peace process.