Horrific tales of Bangladeshi female workers in ME countries 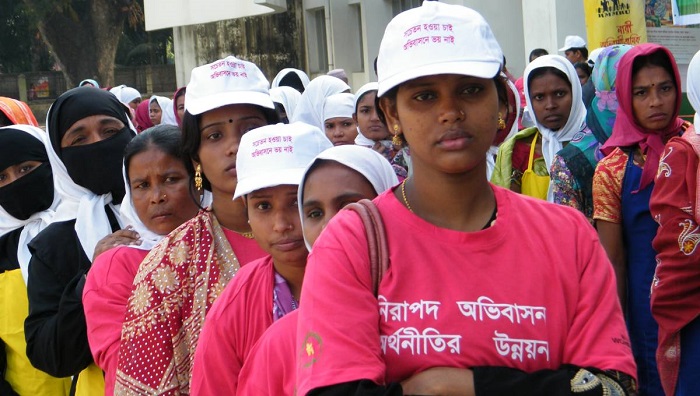 Having failed to endure physical and mental torture in an office in Saudi Arabia, a Bangladeshi female worker tried to escape jumping off a two-storey building and suffered severe injuries, forcing her to undergo treatment at a hospital there for two months.

The dream of Dalia, in her early 20s, got shattered immediately after the horrific experience there. Dalia, the lone bread earner of her family, had to return home empty-handed.

The Bangladesh Embassy in Saudi Arab facilitated the return of Dalia and many others.

The ill-fated woman narrated her traumatic experience to the UNB correspondent on her return home on August 27 with 109 other female workers by a flight of Emirate Airways (EK 584).

Dalia said she went to Saudi Arabia on July 10, 2018 leaving her child and husband behind through Concord Apex Agency paying Tk 60,000 and her salary was fixed at 1,000 Saudi Riyal but she received only 800 Riyal.

“I was supposed to take care of a woman but I was forced to do all the household works there and then I was sold out on March 17,” Dalia said with her eyes full of tears.

With a high hope to have a better life, thousands of Bangladeshi female workers go to Middle Eastern countries every year but many of them have to return home being victims of oppression, abuse and deception.

Morsheda of Birampur upazila in Dinajpur went to Saudi Arabia as a housekeeper through Business Alliance Agency.

“They had promised to provide Tk 20,000 as monthly salary but I was paid only Tk 16,000, and it was irregular, too. Whenever I asked for my dues, the house owner used to lock me into a room for 2-3 days. I worked for 18 months but got the salary for only five months,” Morsheda said.

Morsheda went on saying, “I went to police to lodge a complaint over the irregular salary but they put me into jail. After five months, I came back home with the help of Bangladesh Embassy.”

Another woman, Minu Begum, 37, of Kalkini upazila in Madaripur, went to Saudi Arabia in 2018 through an agency at Fakirapool in the capital with a promised salary of Tk 20,000 a month but she came back home after three months without a single penny. “The house owner used to torture me sexually,” she said.

The number of such women might be higher, Shariful added.

These victims took shelter first at the immigration camp and safe home of Bangladesh Embassy and then returned home.

According to Bureau of Manpower Employment and Training (BMET), 322,444 female workers went to Saudi Arabia between 1991 and 2019 July. There are about 7 lakh Bangladeshi female workers in Saudi Arab and other Middle Eastern countries.

BMET data shows 2,222 women who have returned home since January 2018 till date while many others have been staying at the Safe Home of Bangladesh Embassy in Saudi Arabia to get back home.

BMET sources said they have opened a hotline for lodging complaints and pressurising the agencies concerned to compensate the victims.

Meanwhile, BMET forced agencies to compensate over 260 women workers in 2019, the sources said.

Expatriates' Welfare and Overseas Employment secretary Rownaq Jahan said this is true that many women are coming back home but all of their complaints are not true.

She said Bangladesh embassies are dealing with these issues and discussions were held with International Labour Organization (ILO) and International Organization for Migration (IMO) representatives to raise awareness about the repression of migrant workers.

According to information provided by BRAC Migration Programme, female workers returning home falling victims to abuse, maltreatment and fraud by their employers.

Benjir Ahmed, president of Bangladesh Association of International Recruiting Agencies (Baira), said all the complaints filed by women who returned home from Saudi Arabia and other Middle Eastern countries are not correct but some found to be true.

“Foreign recruiting agencies are responsible for the abuse of female workers,” Benjir said adding that if steps could be taken against those immediately the complaints would have come down.

Baira Secretary General Shameem Ahmed Chowdhury Noman said, “Bangladeshi agencies aren’t responsible for the return of the female workers falling victims to torture and abuse because it’s not possible to monitor the things happening in Saudi Araiba from here.”

All the embassies in those countries have information about the recruiting agencies and Bangladesh embassies there could take steps against those agencies, Shameem added.