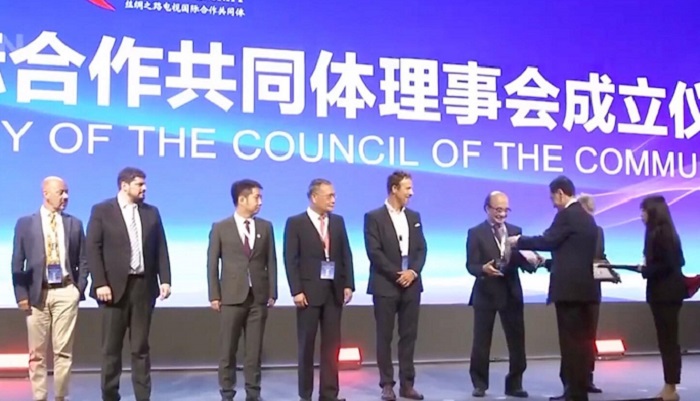 The 2019 Belt and Road Media Community Summit held in Beijing, China on Tuesday.

Delegates from 130 member institutions including television and radio broadcasting organizations, film and TV producers and distributors, video websites, and social media platforms from 58 countries around the globe took part in the summit.

Belt and Road Media Community members say more award-winning programs, documentaries and reports about Belt and Road countries are on their way.

Wang Xiaohui, deputy head of the publicity department of the Communist Party of China (CPC) central committee, said at the summit that the Belt and Road media community will help enhance people-to-people exchange and mutual understanding for countries along the route.

“We will be seeing even more enticing stories, and better ties and convergence," Wang said.

A council of 29 media and production outlets was established at the summit, headed by Shen Haixiong, president of China Media Group.

"Over the past three years, we've seen concrete results coming out of our international cooperation across the board," Shen said, adding that "China Media Group and the Belt and Road Media Community hope to engage more people and create a bright future for global media."

The council will work to promote cooperation in various areas, including news production and media industry alignment.

Abdelrahim Suleiman Ahmed Elkheir, secretary general of the Arab Broadcasting Union, another member of the newly established council, said he has high hopes for the community's future.

"I think this is a great and very timely project, especially with all kinds of new technology coming along right now," the secretary general said. "I also anticipate more in-depth cooperation between Arab and Chinese media.