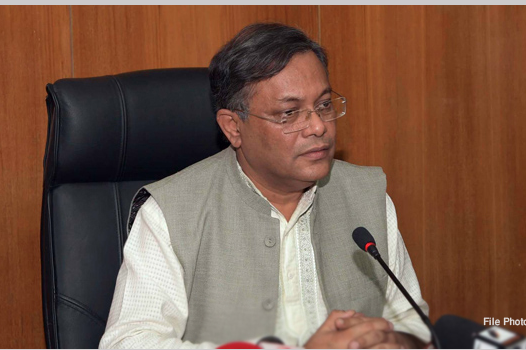 Information Minister Dr Hasan Mahmud  emphasised  on Wednesday the need for raising awareness campaign to check the road accident, calling it one of the major problems in the country.

“I urge all including drivers, vehicles owners, labourers and the countrymen to conduct awareness campaign to check the road mishap,” the minister said after visiting Yamin Alvi, a road accident victim, at Trauma Center here.

Alvi is a son of music composer Parvez Rob who died in a road accident few days ago.

The information minister said the road accidents usually take place due to lack of awareness of the road users including drivers, adding that in some cases, reckless driving is blamed for accident.

“Lack of skills of drivers, tendency to violate the traffic law, technical glitches, over-speed, overtaking and overloading of vehicles are also among the main causes behind the road accidents,” Dr Hasan, also Awami League Publicity and Publication Secretary, said.

He accused that some drivers have no license, saying those fake drivers who have no idea about traffic rules are responsible for most of the accidents.

The minister cast a doubt over Alvi’s accident, saying “the accident of Alvi is not a ‘mere accident’.”

In this connection, he said few days ago, Parvez was killed in a road accident, adding that his son Alvi now got injured critically in another road accident when his friend was also killed.

“The incidents will have to be investigated whether it was accidents or other things,” he added.

Dr Hasan said the government has formed taskforce and it made 110 recommendations to curb the road accidents.

“I hope the road accident will reduce if we can implement the recommendations,” he continued.

He also vowed to bring drivers involved in reckless driving under trial.

The minister also talked with Alvi’s relatives and concerned doctors and inquired about the treatment of him.

Mentionable, on Thursday, a Victor Classic Paribahan bus ran over and killed singer and music composer Parvez Rob, when he was trying to board another bus in Turag area in the capital.

Then, on Saturday night, another vehicle of the same paribahan hit parvez’s son Yamin Alvi, and his friend Mehedi Hasan.

Mehedi was killed instantly and Alvi suffered serious injuries to his back. He is a first-year honours student.