President for financial transparency at all institutions 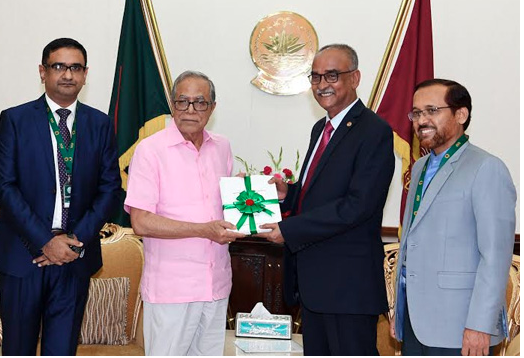 President M Abdul Hamid asked on Wednesday all custodians of public money to play more strong role to ensure financial transparency at all ministries and institutions.

The President came up with the call as a delegation of Comptroller and Auditor General (CAG) of Bangladesh led by CAG Mohammad Muslim Chowdhury submitted its 39 audit and accounts reports to him at Bangabhaban here this afternoon.

Receiving the report, the head of state said it is the duty and responsibility of people concerned to ensure the proper use of public money in the greater interest of the nation, President’s press secretary Joynal Abedin told journalists.

Thanking the CAG and others concerned for preparing the subject-wise report, he said, “This will help increase transparency at all ministries and institutions in financial dealings .  And public interest will be preserved in spending government funds.”

The President was apprised of different aspects of the Annual Audit and Accounts Report for 2014-2015 fiscal and previous financial years by the CAG in the meeting.

A total of 25 annual audit reports of 18 ministries and divisions involving Taka 5539.22 crore, nine special audit reports of eight ministries and divisions amounting to Taka 617:34 crore and five other accounts report were submitted to the President during the visit. The other delegation members included Deputy CAG (Accounts and Reports) Md Mahbubul Haque and Additional CAG (Parliament) AKM Hasibur Rahman. Concerned secretaries to the President were also present at the meeting.