All hearts for Anushka and Virat Kohli's beach pic 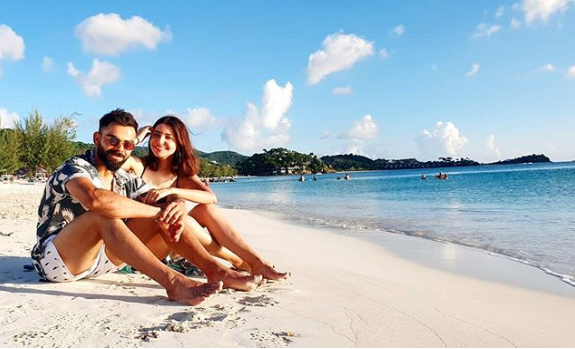 Today is a good day because we spotted a new photo of Virat Kohli and Anushka Sharma on Instagram! Virat and Anushka, who touched down in Mumbai earlier this week, featured in an adorable selfie, which appears to have been clicked at an undisclosed beach destination. Virat and Anushka can be seen adorably chilling together on a sun bed - Virat will win your heart with his goofy expression while Anushka matches up to his swag by being absolutely cute. Virat Kohli had the best caption for his loved-up selfie with Anushka - he picked out a single emoji from the list and we can all guess which one. Anushka Sharma has Virat's heart after all.

How adorable are Virat Kohli and Anushka Sharma? Very.

After wrapping the West Indies Tour, Virat Kohli touched down in Maximum City with Anushka Sharma in tow. The couple send the airport paparazzi in a frenzy with their coordinated outfits as they were spotted twinning in blue.

It's safe to categorise Anushka and Virat as "beach bums" as they often bring in sea vibes on their Instagram. Bringing you just a few glimpses of Virat and Anushka's Caribbean diaries. You're welcome.

Anushka and Virat Kohli set major couple goals as they married at a countryside resort in Tuscany in a private ceremony in 2017 after dating for several years. Anushka was last seen in Zero and is taking a break from films after a hectic schedule post her wedding. On the work front, Anushka will be producing a few Netflix originals.