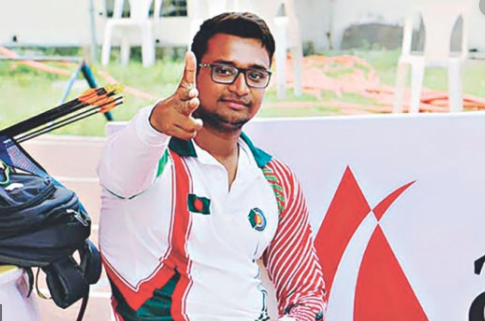 Ruman will now compete against Shi Zheigi of China in the final scheduled to be held on Saturday (Sept 13).

On the day’s other men’s singles elimination round matches, Ruman Sana beat Thiha Htet Zaw of Myanmar, defeated Thepna Denchai of Thailand both by 6-0 set and beat Yang Huie-Jhe of Chinese Taipei by 7-1 set points in the quarterfinal.

Besides, Tamimul Islam beat Huang Guan Jhong of Chinese Taipei by 6-5 set but lost to Ng Justin Wei Qing of Singapore by 6-5 set in the pre quarterfinal in the recurve men’s singles event.

On the other hand, Mohammad Hakim Ahmed Rubel lost to Thamwong Witthaya of Thailand by 6-4 set point.

In the recurve women’s singles events, Beauty Roy beat Abdul Halil Nur Afisa of Malaysia by 6-2 set points but she failed to keep her nerve cool as she lost to Wu Jiaxin of Chinese Taipei by 6-4 set point.

In the recurve women’s qualification round, Beauty Roy finished 14th position among the 27 competitors after scoring 623.