Nissan boss to step down amid pay scandal 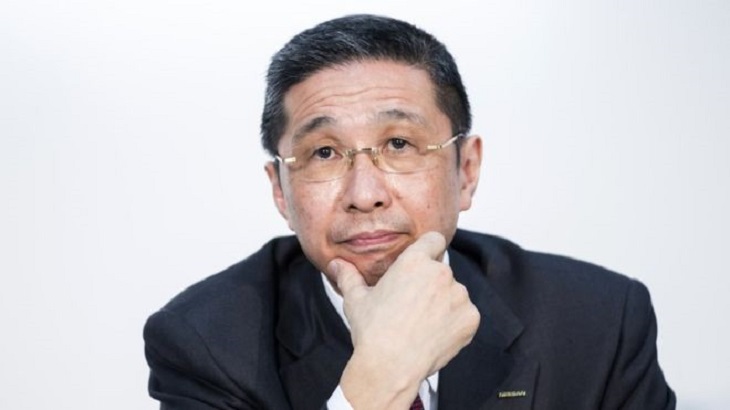 Nissan chief executive Hiroto Saikawa will step down next week as the carmaker grapples with an executive pay scandal.

The announcement followed a meeting of the carmaker's board on Monday.

Earlier, Mr Saikawa told Japanese media he was "keen to pass the torch" when asked if he was preparing to resign.

The Nissan boss had come under pressure after saying he had been overpaid as part of a bonus scheme. However, he denied wrongdoing.

Board chairman Yasushi Kimura told reporters that Mr Saikawa would quit on 16 September.

"After the board discussion, the board asked Mr Saikawa to step down from the chief executive position. Mr Saikawa accepted this," Mr Kimura said.

Nissan said it hoped to find a replacement by the end of next month. Chief operating officer Yasuhiro Yamauchi will take on the role temporarily.

The 65-year-old had been accused of receiving hundreds of thousands of dollars worth of extra share option payments in 2013.

It was the latest twist in a saga plaguing the firm that centres on improper payments to top executives.

Following reports that Mr Saikawa was preparing to step down, the Nissan boss told reporters in Japan: "I'm keen to pass the torch to the next generation as soon as possible."

He has previously said he would resign in light of slowing sales and falling profits.

The sliding performance prompted the firm to unveil plans to slash 12,500 jobs around the world.

Mr Saikawa's troubles are the latest scandal to hit the Japanese carmaker, following the arrest of former chairman Carlos Ghosn in November.

Mr Ghosn, the architect of the Renault-Nissan alliance, faces accusations of financial misconduct and breach of trust. He denies any wrongdoing and has said his arrest in Japan was the result of a "plot and treason" against him.

The saga has cast doubt over the future of the Renault-Nissan alliance and the outlook for the company.

His long-running detention in Tokyo has also led to scrutiny of the Japanese legal system.