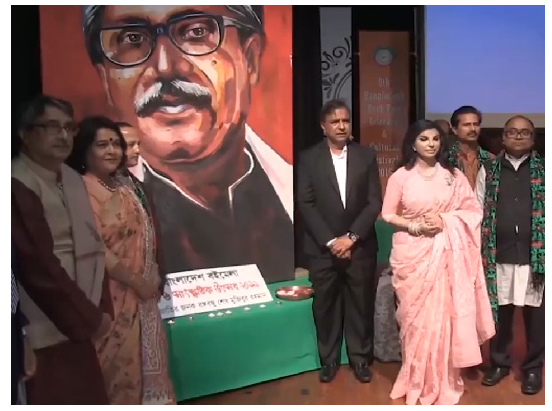 Since the inauguration of the book fair on Sunday, the corner became a centre point for the book lovers, said a release.

Decorated with banners and posters of Bangabandhu and Prime Minister Sheikh Hasina, the book stall also exhibits books written by the premier.

State Minister for Cultural Affairs KM Khalid inaugurated the book fair while Bangladesh High Commissioner to the UK Saida Muna Tasneem, Dhaka University Bangla Department Chairman Professor Bismadeb Chowdhury, poet and journalist Shamim Azad, Sammilita Sahitya O Sangskritik Parishad, UK President Faruque Ahmed, its Secretary Iqbal Hossain Bulbul and Dr Mukit Khan were present on the occasion. Eminent journalist and writer Abdul Gaffar Chowdhury wished success of the programme through a video message in the function. He could not come to the function as he was undergoing treatment at a hospital.

Speaking on the occasion, KM Khalid said the government has taken different steps to keep the practice of Bangla language, culture and heritage and flourishing of those among the expatriate Bangladeshis in the UK.

As part of that, steps have been taken to keep more Bangla books at different community libraries in London, he added.

Saida Muna Tasneem said they have a plan to set up ‘Bangabandhu Pavilion’ under the arrangement of the High Commission at such fairs in the days to come.

She said Bangabandhu’s birth centenary will be celebrated in the next year in the UK likewise Bangladesh and other countries.